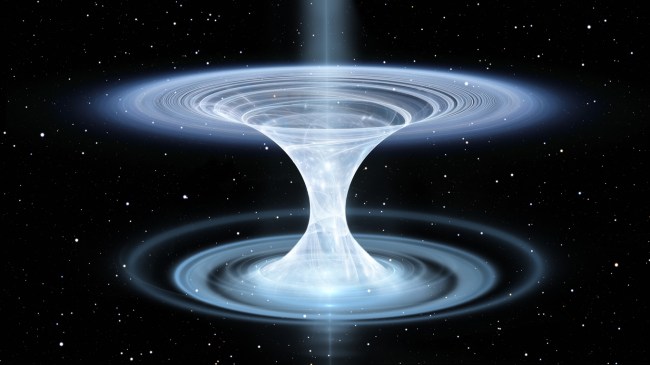 There is a black hole in the center of the Milky Way galaxy, and scientists believe that it could actually be a wormhole. This could mean that humans might have the potential to one day travel billions of light-years in the distance of only a few feet by using this cosmic shortcut.

A wormhole is a hypothetical celestial structure that looks like a tunnel or a funnel that links two disparate points in space and time. Spacetime is a theoretical model where the three dimensions of space and the one dimension of time are fused into a single interwoven four-dimensional continuum.

Sagittarius A* is the supermassive black hole in the center of the Milky Way galaxy that is 26,000 light-years away from Earth. Black holes have an event horizon, which has a gravitational pull so powerful that it sucks in everything in its vicinity, even light. At the center of the black hole is gravitational singularity, “a region where the spacetime curvature becomes infinite.” Objects are crushed and added to the total of the black hole.

While a wormhole has another side and would potentially allow travel to another place and time by opening up a time-traveling portal based on Albert Einstein’s general theory of relativity and somewhat like the movie Interstellar.

A star named “S2” has been orbiting around Sag A* for years, and scientists have taken great notice of how it circles and wobbles around its black hole appearing to “dance.” A new scientific paper claims that “studying the orbits of stars around the black hole at the center of our galaxy, we could soon tell if this black hole harbors a traversable wormhole.”

“If you have two stars, one on each side of the wormhole, the star on our side should feel the gravitational influence of the star that’s on the other side,” said Professor Dejan Stojkovic, a cosmologist at the University at Buffalo College of Arts and Sciences, who worked on a new scientific study of the possibility of a nearby wormhole. “The gravitational flux will go through the wormhole. So if you map the expected orbit of a star around Sagittarius A*, you should see deviations from that orbit if there is a wormhole there with a star on the other side.”

Scientists hypothesize that objects orbiting S2 could be pushed around by the gravitational pull of other large celestial masses on the other side of the wormhole.

The study titled “Observing a Wormhole” was published this month in the journal Physical Review D by Stojkovic and De-Chang Dai from the School of Physics Science and Technology at Yangzhou University in China.

“If astronomers just measure the orbit of S2 with higher precision so that we can narrow it down [and notice such a dance],” says Dejan Stojkovic, a theoretical physicist at the University at Buffalo who helped calculate the result, “that’s it. That’s huge.”

Stojkovic believes there could be millions of wormholes in the universe. “If one wormhole is found, then there is no reason to believe that there aren’t many others,” he explains. “When we found the first candidate for a black hole, then suddenly we saw millions of them.”

But until we build a spacecraft that can travel at the speed of hundreds of light-years or create our own manmade wormhole created by discovering and manipulating exotic matter that is human-traversable, we won’t know for sure if our galaxy’s black hole is a wormhole. Stojkovic set the expectations that even if we find a wormhole, we won’t be able to travel in it with our current primitive technology. Not to mention that wormholes are extremely unstable, and as soon as anything attempted to enter the wormhole that it would collapse.

“If wormholes are ever discovered, they’re not going to be the kind that science fiction often envisions,” the cosmologist said. “Even if a wormhole is traversable, people and spaceships most likely aren’t going to be passing through. Realistically, you would need a source of negative energy to keep the wormhole open, and we don’t know how to do that. To create a huge wormhole that’s stable, you need some magic.”

Wormholes are loved by science fiction writers because of the time-traveling interstellar possibilities.