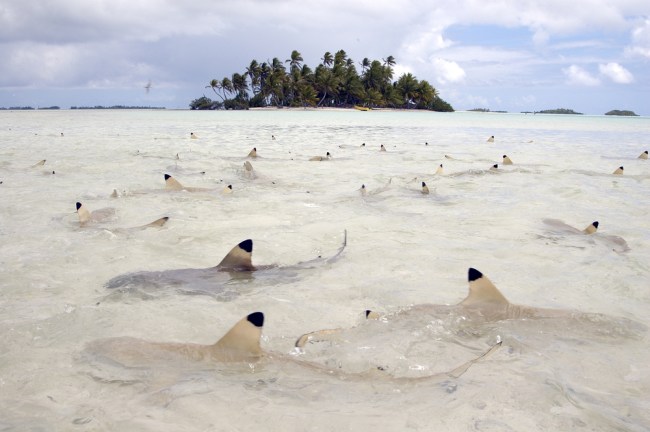 The annual blacktip shark migration past Florida is one of the coolest spectacles in nature. Millions of sharks huge Florida’s coast, swimming along the beaches while following huge schools of mullet and other baitfish.

This annual event leads to some absolutely insane footage showing thousands and thousands of sharks swimming just a frisbee’s throw away from beachgoers. Our boy Josh from BlacktipH, the largest fishing channel on YouTube, has been pulling some crazy drone shots and fishing footage of this blacktip shark migration.

I’ve pulled together a few different clips and pictures to give you an idea of just how massive this shark migration is:

More great #sharkmigration drone video off Palm Beach by Ivy Yin. The #shark migration normally peaks this time of year. Shark experts say just offshore is the "shark super-highway" where thousands of sharks are on the move this time of year. #Florida pic.twitter.com/MA798KKFaZ

Here’s Josh from @BlacktipH crushing the blacktip sharks with topwater lures (all catch and release):

It’s amazing how powerful blacktip sharks are! With very little drag, an 80lb blacktip managed to straighten this hook! pic.twitter.com/7PIEpe59YB

This footage was taken last week:

The President’s son, Don Jr., even got in on the blacktip fishing action with so many sharks in the area:

Helped @DonaldJTrumpJr break in his new surf fishing gear with some blacktip sharks. The shark was released. pic.twitter.com/RV4wTG8JR7

Here’s what the migration has looked like in years past when the drone is in the right place at the right time:

If you were glued to Twitter last weekend (you can follow me at @casspa), then chances are you saw some pictures showing thousands of sharks swimming past Donald Trump’s Mar-a-Lago resort in South Florida. That was just a fraction of the total number of blacktip sharks migrating through S.Fl at the moment.

If you’re a sport fisherman and enjoy a good catch-and-release fishing encounter then now’s a good time to hit the beaches because the action is on fire. Along with the sharks you’ll find countless other species following the baitfish.