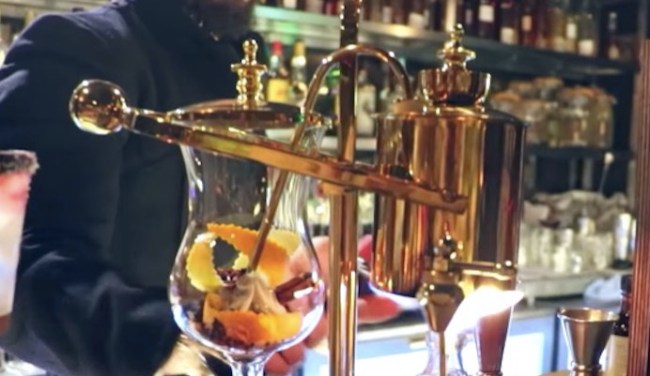 The Bletchley is a World War II-themed bar inspired by Alan Turing and Sherlock Holmes. Everything in this over-the-top cocktail bar is inspired by the coding efforts of WWII. When you arrive at this bar you’re given an Army jacket and a welcome cocktail, then you’re forced to solve codes and puzzles in an interactive experience that makes it one of London’s top watering holes.

One of the cocktails being sold at The Bletchley is named the ‘King George VI’, and it sells for £100 ($139 USD). It is a gin-based cocktail which brings together three spirits into one (allegedly) exquisite cocktail: Monkey 47 (gin), Lanique (rose vodka), and Chambord. The cocktail itself takes between 30-40 minutes to make and Business Insider went behind-the-scenes at The Bletchley to find out what goes into this comically expensive concoction:

Bar manager David Ammar told Business Insider: “The recipe is coming from Montgomery Collins who was a British Air Force soldier during the Second World War and went to Germany to help them to rebuild everything back once the war was finished. Lanique is a Polish liqueur and the Chambord is French. Those two were helping England during the war.”

I’ve never had Lanique, at least not that I remember, maybe I had it as an ingredient in some cocktail before. Rose has always been my favorite shisha flavor for Hookah so I have to assume I’d like this. And I’ve never been to The Bletchley. Last time I was in London we went to Mr. Fogg’s Residence, one of the top cocktail bars in the city, and I have to say that London is definitely destroying NYC when it comes to cocktail bars based on that experience. After seeing the history that goes into the King George VI cocktail I’m beginning to think that NYC really needs to step up its cocktail game and move away from dark, trendy speakeasy cocktail bars to something that has actual substance.