What Was The Mysterious Blue Light On Earth That Astronaut Photographed From The ISS? 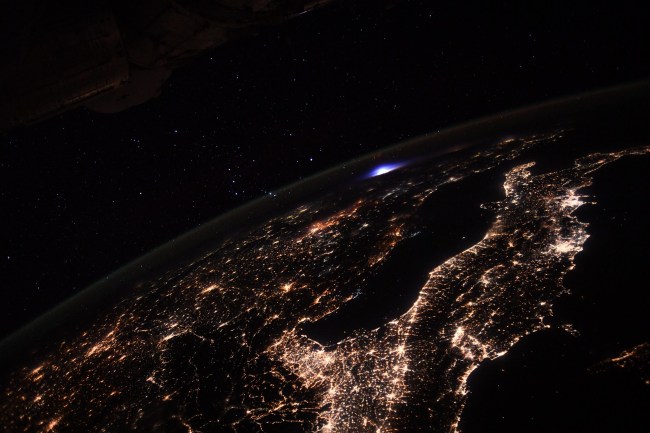 An astronaut onboard the International Space Station captured an incredible photo of a mysterious blue light. Many have questioned what the illuminated phenomenon could be – asking if the glowing light could be a UFO. However, science has an explanation of what the mystifying blue lights on Earth could be.

French European Space Agency astronaut Thomas Pesquet shared an extraordinary photo of a glowing blue light over Earth as seen from the ISS.

🌩A single frame from a timelapse over #Europe, showing a transient luminous event in the upper atmosphere! We have a 🇩🇰-led facility monitoring these events thanks in part to @Astro_Andreas who took the first picture of them from space! ⚡ https://t.co/tfFS3KqYmm #MissionAlpha pic.twitter.com/XqBdJ64pBq

A version of TLEs are “blue jets” because of the bright blue lights stretching into space. The blue jets are “believed to be initiated as ‘normal’ lightning discharges between the upper positive charge region in a thundercloud and a negative ‘screening layer’ present above this charge region.” The blue color is thought to be because of “blue and near-ultraviolet emission lines from neutral and ionized molecular nitrogen.”

TLEs are almost impossible to see from Earth because the cloud cover hides the light show shooting into space. However, they are plain to see from the International Space Station.

“This is a very rare occurrence and we have a facility outside Europe’s Columbus laboratory dedicated to observing these flashes of light. The Space Station is extremely well suited for this observatory as it flies over the equator where there are more thunderstorms,” Pesquet wrote.