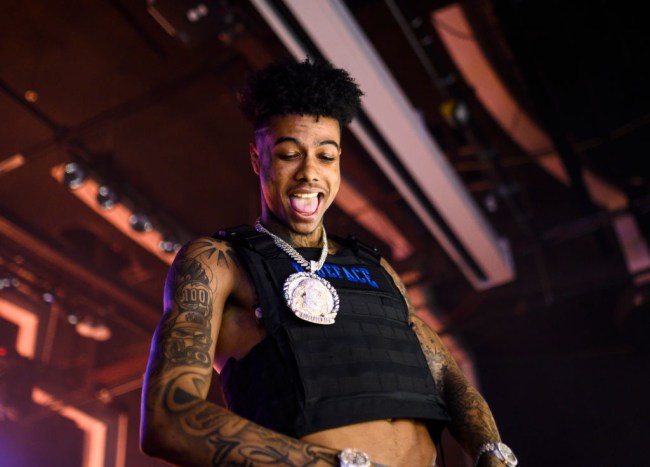 Tis the season of giving and rapper Blueface gave money to some people in need on Monday. However, this is 2019, so that means that even when someone is giving charity, they will be criticized online.

On Monday, Blueface went to Skid Row in downtown L.A., climbed to the top of an SUV, and started throwing bills at the crowd in the street. The prospect of free cash brought a horde of people scooping up the bills from the road. There were reports that Blueface dished out $50,000 to the less fortunate, an amazing gesture of kindness no matter how he distributed it.

The optics on this aren’t exactly optimal. The scene comes off like Blueface thinks of himself as a medieval king throwing money at peasants. However, he is giving money to people in dire need. There are far more humiliating things people have done for money. I mean, Robert De Niro appeared in Dirty Grandpa.

On social media, the online mob decided to be judge and jury by castigating the 22-year-old Thotiana rapper. Many rap fans on Twitter said the manner of Blueface’s charity was “humiliating” to the people, some of which were homeless.

Look how Rapper, BLUEFACE humiliates people in need(Downtown Los Angeles) just for Cloud!! Couldn't he just line them up and hand them the money!? I mean really.. Are we gon sit here and lie & say this is genuine? F&%k NO, f&%k the cloud and the hype…

Standing on top of his vehicle, rapper Blueface threw $50,000 in cash at poor people on Skid Row in Los Angeles.

I’m not the moral authority, but I found this to be revolting.

When I went to Los Angeles, I shook people’s hands & treated them w/ respect.https://t.co/KLGAbOInl3

Wow. Blueface stood on top of a car and flung money into a crowd of poor people. This is not “the spirit of giving.” This is contempt of the poor mixed with narcissism. Even if his intentions were good, this isn’t ok. Hopefully he has someone advising him. pic.twitter.com/N4QIwZ06HO

guess I've been giving money to the homeless the wrong way. I just quietly hand it to them instead of making them crawl around like a dog, nor do I record it on my phone and post it on social media to further humiliate them while feeding my own inflated ego. Thanks Blueface! https://t.co/eAv5b6mcPZ

#Blueface, your heart may have been in the right place and maybe your privilege created blindspots for you, but you cannot help people by humiliating them. The little cash they scraped from the ground isn’t enough to help. There were more effective ways to help. https://t.co/mWbEGE6UOp

Someone tell Blueface that this is how you hand things out to people 🙄 https://t.co/0RMKtaY9Fb

This is disgusting and de-humanizing. Stop making spectacles out of other people's difficult situations.

Capitalism is a system that allows Blueface to have all this money while people are homeless. Just another reason to destroy that shit. https://t.co/5eYK4HCFDu

also, no one is coming for blue face. idk that nigga. but i will comment on behavior openly as i see fit. he’s not the only one. david dobrik does this, too. i just keep to myself. but watching humans scramble for money makes me sad.

the thing that makes blue face a loser is this: he was giving to be seen. he wasn’t out there being a nice person. that mf was making poor people scrape money off the ground. making an already degrading experience even more degrading. he’s an asshole.

There were also plenty of hip-hop fans who supported Blueface.

If Blueface was in front of you throwing $50,000 you gone get on Twitter and complaining about how degrading it was or you gone pick that shit up?

How much money have you donated? How have you helped the homeless?? All these bum ass ppl criticizing #Blueface for doing something while people haven't done shit for the homeless, but have a lot to say from the couch on what he's doing.. smh pic.twitter.com/qkZ70iQEOK

In the end, Blueface is giving more in charity than the people attacking him online for his generous benevolence (But it also wasn’t a good look in the fashion he did it). Unless he knew this was going to spark outrage and wanted the publicity for his goodwill.