Bob Odenkirk On ‘Better Call Saul’ Season 5: ‘Everything’s On Fire And It’s Burning Down Around Us’ 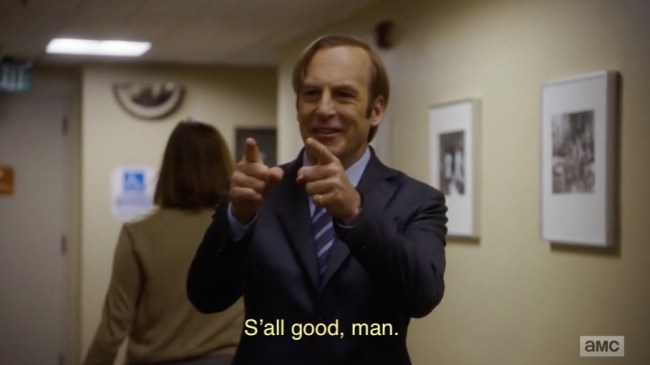 Can you fucking BELIEVE that Better Call Saul is entering its fifth season, which is the exact number of seasons that Breaking Bad ran for? And given the current trajectory of the show, it seems as though Better Call Saul has to run for at least six seasons, which will actually make it longer than the show its a spin-off of. Pretty amazing stuff when you think about it.

And really, that’s just a testament to the true quality of Better Call Saul, as it was able to craft its own enthralling narratives and characters that have been able to stand up on their own without the help of Breaking Bad lore.

Now, after four seasons of slow and steady dissension, Better Call Saul finally seems poised to fully transition do-gooding Jimmy McGill into criminal lawyer Saul Goodman, and according to series star Bob Odenkirk, that transition is about to pick up some serious steam.

Speaking to The Hollywood Reporter, Odenkirk — who is nominated for Best Actor in a Drama Series at this year’s Emmy Awards — said that while Better Call Saul has been a slow burn up to this point, it’s turning now and “it’s turning rapidly”:

“They’ve been building it slowly but it’s turning. Now it’s turning rapidly, I would say. That’s similar to Breaking Bad, too. This very slow buildup as we go up the roller-coaster ramp and then, it starts going downhill, it just cannot stop. And that’s where we are in season five, which we’re shooting right now.”

“Season five is just everything’s on fire, and it’s just burning down around us,” he added. [The Hollywood Reporter]

Given that season four ended with Jimmy McGill officially adopting the Saul Goodman moniker, season five will likely be the first time that we see the iconic con-man lawyer don his classic outrageous pastel-colored suits.

At this time, while no official premiere date has been announced, expect the fifth season of Better Call Saul to premiere in the first half of 2020.