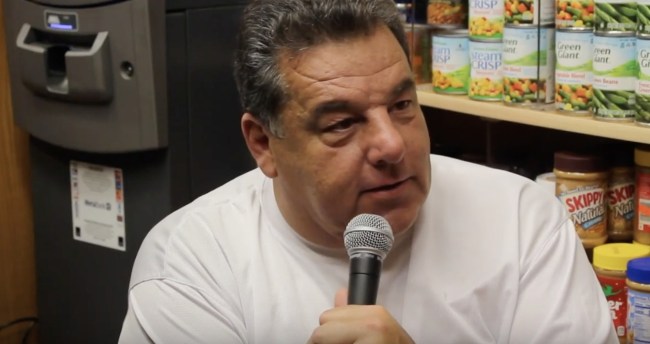 Over a decade after it went off-air, The Sopranos remains gospel for all sorts of reasons. Let’s list it:

In 2006, The Sopranos became the first show I ever binged watched when a college friend got all the DVDs and started lending them out to friends.

Before his career-defining role on The Sopranos, Schirripa, originally from Brooklyn, lived and worked in Las Vegas as the entertainment director of the Riviera Hotel and Casino. This job got him quite comfortable with show business, cutting his teeth as a comedy booker for the casino. In fact, he booked many massive comedians like Joe Rogan and Doug Stanhope in the ’90s to perform there, as he describes in an episode of Dan LaMorte and Jack Byram’s new podcast IN THE AISLE.

In 1994, Martin Scorsese’s Casino filmed in Vegas and Schirripa got a minor role as an extra. Specifically, in Joe Pesci’s infamous pen scene:

Schirripa “caught the acting bug” shortly after this, leading him to a couple odd acting jobs here and there, building a few credits for roles. Eventually, he auditioned for a role for The Sopranos.

Schirripa got the part of Bobby Baccalieri, appearing in the second ever episode of the show. He quickly became a fan-favorite, a quiet and beloved goofball always in Tony Soprano’s corner:

That said, in the first episode of the show, it wasn’t an easy career transition for Schirripa, pivoting from a stable job and income as a house-man at the Riviera to a working actor.

More or less, Schirripa had to pay to be on the show the first season since the budget was so low.

He figured it was the right move for a bigger career on-screen, so he doubled-down on himself.

Schirripa recalls this struggle in vivid details on Dan LaMorte and Jack Byram’s new podcast IN THE AISLE, which is in NYC between the aisles of LaMorte’s father’s deli in FiDi.

“They said you should be a reoccurring character. There’s no money, they won’t fly me, and they won’t put me up. My agent said don’t take it. The Sopranos wasn’t what it became – it hadn’t exploded yet.

It wasn’t huge yet. They would pay me $3500 an episode… maybe not even. I had to put myself up and fly myself.

One thing I knew – I didn’t want to be a struggling actor. I wasn’t going to play that. Even early on, they made me a series regular and I had started working after the first six episodes of the first season…

Then I got a big movie, after that which was more money than I would ever imagine.”

Trust your gut and always double-down on yourself.

Listen to it in his own words here:

It’s been a hell of a day releasing this new project. Thanks to all those who listened so far. I never wanted to just have a podcast, I wanted it to be weird. Using the aisle of a deli for a studio guaranteed that.

3 episodes live, including one with The Sopranos “Bobby Bacala” pic.twitter.com/2a27iLAqS7

Watch the full interview with Steve Schirripa on IN THE AISLE, now streaming over on YouTube. And throw it a like + subscribe while you’re over there so you can stream it on your TV.