Remember That Dude Who Drove His TRUCK Into A Crowd Of Protestors? They Released Him Without Filing Charges 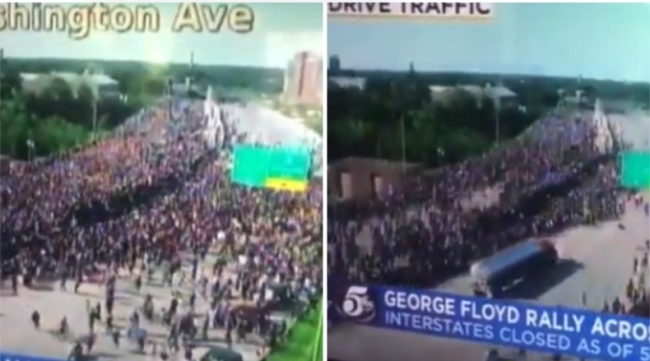 Good lord. These are LAY-UPS and these bureaucrats still can’t figure it out. I mean, holy hell, I get that our country is as divided as the risks and rewards of taking one of those gas station boner pills, but I think we can all agree that driving a truck into a group of people — any people — is extremely BAD. It’s like on the first page of the terrorism playbook. Remember when 86 people died in Nice, France, back in 2016 after a terrorist drove a 19-ton cargo truck into a group of people!? Same thing, only difference is, thankfully, no one in Minnesota died. One person doesn’t react quick enough and they’re run over by a lunatic driving literal tons of steel.

“DPS Commissioner John Harrington says it appears that no protesters on the southbound lanes of the interstate were seriously hurt. He estimates that 5,000 to 6,000 people were on the bridge at the time the truck sped through. Harrington says the truck was already on the interstate before the incident, even though it had closed about 40 minutes earlier at 5 p.m. and barriers were in place specifically for the marchers.” [via CBS Minnesota]

The truck driver — 35-year-old Bogdan Vechirko of Otsego, Minnesota — was initially jailed on Sunday on suspicion of assault. Since then, he was held in the Hennepin County jail until Tuesday before being released without criminal charges being filed.

The County Attorney’s Office had until noon Tuesday to hold Vechirko without charges before they had to release him, pending further investigation, Hennepin County Attorney Mike Freeman said in a statement Tuesday.

“Investigators are in the process of gathering additional information and answers to aid in the charging decision,” the statement says.

State Public Safety Commissioner John Harrington said Monday that the driver “panicked, and he just kept barreling forward” but did not breach any barriers put up to protect the protesters and was not aiming for anyone. [via Star Tribune]

A truck driver who drove into Minneapolis protesters has been released from jail without criminal charges.

The governor said the driver was "frustrated" when he drove onto the highway, just before it was closed to traffic. No protesters were injured. pic.twitter.com/sWRaJIDm14

Uh, yeah, hey guys… we’ve got your evidence for your investigation RIGHT HERE. You know, that video of a man — again, we repeat — DRIVING HIS MASSIVE TRUCK INTO A CROWD OF AMERICANS.