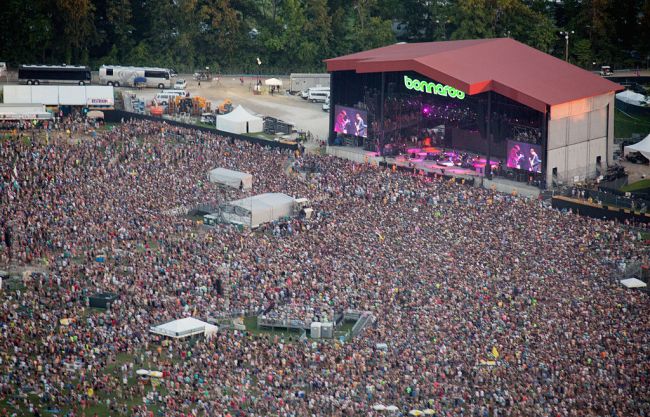 Tropical Depression Ida has left a lot of festival goers depressed after bringing heavy rain through Tennessee over the last 48 hours. Due to waterlogged campsites and flooding throughout the grounds, Bonnaroo has made the decision to cancel this year’s festival.

Although Hurricane Ida was downgraded upon making landfall in the Gulf Coast and moving up through Louisiana, Mississippi and Alabama, it continues to carry some serious precipitation through its path.

The Bonnaroo Farm is located in Manchester, Tennessee, about an hour and a half southeast of Nashville. Over the past 48 hours, the region has seen about three inches of rainfall.

With a flash flood watch in effect until 1:00 a.m. on Wednesday, it does not show signs of stopping. The festival was scheduled to open its campgrounds on Wednesday morning and it simply is not feasible.

“The ground is incredibly saturated on our tollbooth paths, and the campgrounds are flooded to the point that we are unable to drive in or park vehicles safely,” the festival said in its statement. All tickets will be refunded.

Here are the conditions this morning in Manchester, TN with significant amounts of standing water in the @Bonnaroo campgrounds…as campers are set to show up in less than 24 hours — we will hear from the festival sometime today. | 📷: @AustRog12 pic.twitter.com/1Rx3lxBKNM

Bonnaroo has not taken place since 2019. The festival’s 2020 edition was first postponed and then cancelled outright due to COVID-19. Then, in 2021, it was pushed from June to September for pandemic-related reasons.

However, now, because of Ida, it will not take place.

Here’s the thing. Yes, this is a bummer. People took vacation days off of work that they can’t get back, people spent money on camping gear and food, people drive through the night to attend, and people are understandably frustrated that their plans are cancelled.

However, these people are acting as if Bonnaroo was able to control the after effects of what was, at one point, a CATEGORY 4 HURRICANE.

Think of it from the other side…

Oh, and as if that wasn’t enough— these people are throwing a fit about a festival being cancelled by a massive rainstorm while the people of Louisiana, Mississippi and Alabama are currently rebuilding their entire lives after the same storm took everything they had.

People in New Orleans will be without power for up to three weeks. Others will not have power for more than a month. And yet, these people cannot see beyond themselves and their festival.

Look at these people and learn from them. Don’t be like them.

What about the fact you can’t even roll over tickets? I bought these on Black Friday in 2019 on a layaway plan. Am I getting interest on the money I spent almost two years ago? Loyal Roo goer here but good luck dealing with this PR nightmare and gaining any confidence back

And if you don’t refund me for my losses give me the contact info for your legal department!

You gotta be fucking kiding me. I’ll never be going to Bonnaroo again.

Make the festival happen, as you’ve strung us along that path.

You all made everything sound like things were getting in order, up to a little more than half a day before entry.

If they were not, claiming they were is pretty fraudulent.

Lmao summer camp was a literal lake and everyone still was partying. Maybe you guys should have planned a little better. This rain was nothing new 🙄

This is ridiculous! We have dealt with much worse! It’s part of the experience. In fact this weather is a dream. If called upon… We could have made it work. Will some rich cat @elonmusk buy this festival so we can avoid these ridiculous Karen/Daren policies from @LiveNation

Other people had jokes about the cancellation.

These people, who are not throwing a fit about a storm that left a trail of massive destruction, had lighter takes. This one in particular is spot-on:

The rest are just funny:

Every person when @Bonnaroo comes out with an update pic.twitter.com/tEGbmAdJa2

Who’s down to meet at the farm and dry it up using these bad bois?! .@Bonnaroo pic.twitter.com/XjwyYAgzws

Me vs the guy who canceled Bonnaroo pic.twitter.com/l4YAhmWJiW

Bonnaroo could’ve at least done me a solid and said they were cancelling yesterday before I went and got this haircut for it 😭 pic.twitter.com/79T90j7fVV

When it comes to life, it’s all about perspective, people. Perspective.