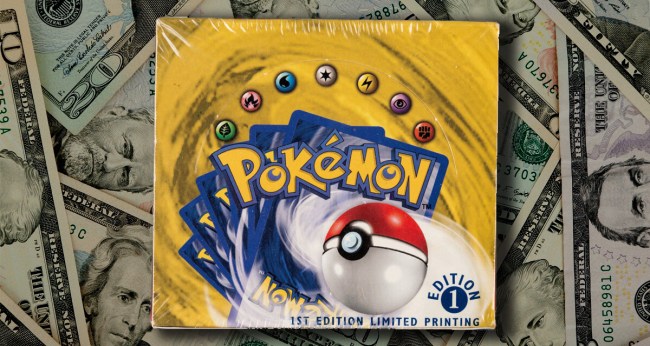 Demand for elite Pokémon collectibles continues to soar as the folks over at Heritage Auctions just sold a Pokémon First Edition Base Set Sealed Booster Box (Wizards of the Coast, 1999) for a world record setting $408,000.

“Recent history has shown that the demand for First Edition Base Set Sealed Booster Boxes is soaring,” said Jesus Garcia, Trading Cards Expert in the Heritage Auctions Comics Department. “Based on the competitive bidding when Heritage Auctions sold a similar set in November, we expected the interest in this set to be even higher, and our collectors did not disappoint.”

Offered in its original shrink wrap, the First Edition Base Set Sealed Booster Box broke the previous world record for an auction sale, set when Heritage Auctions sold a similar booster box in November 2020 for $360,000. Still sealed in its original shrink wrap, the set was created in 1999 by Wizards of the Coast and set featured 102 cards, most notably the Charizard – the pinnacle of Pokémon box collecting.

Due to their low print run, these box sets have become extremely scarce, especially those still in the original sealed state. The box contains 36 booster packs, each with 11 cards for a total of 396 cards, each of which likely is in GEM MINT condition because the packs have not yet been handled.

A Pokémon Blastoise #009/165R Commissioned Presentation Galaxy Star Hologram (Wizards of the Coast, 1998) CGC NM/Mint+ 8.5 garnered 52 bids before finishing at $360,000. This card is one of just two copies produced by Cartamundi that were used as “Presentation” pieces to seek Nintendo’s approval to begin producing Pokémon cards in English. The card was purchased by Thomas Fish at Blowout Cards, who said after the sale that “this is the card that started it all, perhaps the most prestigious and rare of all Pokémon collectibles. I am thrilled for our client and glad we could be part of this historic sale.”

A Pokémon Charizard #4 First Edition Base Set Rare Hologram Trading Card also is arguably the hottest card in the entire hobby. With artwork by Mitsuhiro Arita, the card is one of just 2,627 copies certified by PSA, only 120 of which earned a GEM MT grade.