David Fincher, Director Of Super Murdery Stuff Like ‘Zodiac’ And ‘Seven’, Was The One Helping Brad Pitt Write His Hilarious Speeches 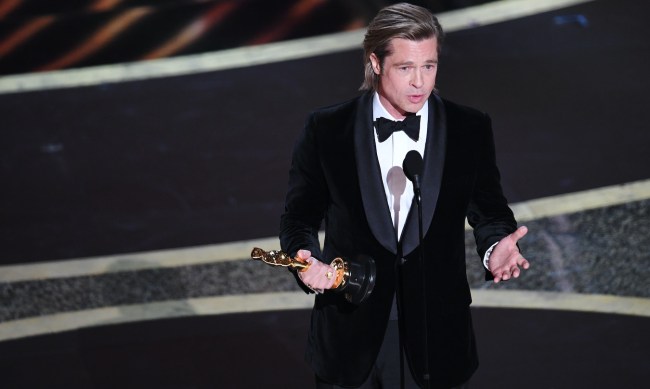 I’ll often bemoan what seems like a disproportionate distribution of talent amongst our species.

Take Bradley Cooper in the Academy Award-nominated film A Star Is Born, for example — this dude is out here writing, directing, acting, singing, and playing the fucking guitar. So, not only is he a movie star and also ridiculously handsome, but he could also dick around and be a rockstar if he really wanted to. Sure, Jared Leto pulls it off, but fuck that dude.

And it’s not that I’m, like, jealous of him (well, come on, of course I am, but not overwhelmingly so), it’s just that I believe maybe, I don’t know, 7-10% of his talent could have been redistributed elsewhere and Cooper would be no worse for the wear while that other person is now approximately a tenth more talented than they were. Seems like a bargain if you ask me.

What is the point of all this Bradley Cooper-related rambling, you ask? The point is that I could do without David Fincher — perhaps one of the most gifted and influential filmmakers of the last 20 years — also turning out to be an… excellent joke writer? I mean what the fuck, man.

According to Pitt, he’s written those speeches himself — mostly. However, on the red carpet before the Oscars ceremony, Pitt told Variety‘s Marc Malkin that he had some “very, very funny friends” helped him “with some laughs.”

Those “funny friends” include to comedians like Jim Jefferies and Bob Oschack, and perhaps most surprisingly, his “Fight Club” director David Fincher, to help him write his comedy.

“My man Fincher, we trade barbs every week,” Pitt said. [via Variety]

So, you’re saying that Fincher — who is known for his tightly-wound dramas such as Seven and Zodiac and Fight Club and Gone Girl and Mindhunter — also just so happens to be a fucking riot? Sure, whatever man, if you say so — I guess me and my talentless ass will just go fuck myself.