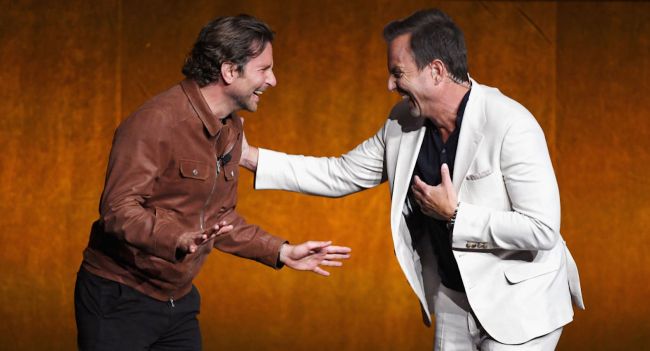 Bradley Cooper, a longtime friend of Smartless hosts Will Arnett, Jason Bateman, and Sean Hayes recently appeared on the podcast and told an incredible story of how he credits Arnett with making him realize he had a problem with drugs and alcohol.

“Will, do you remember this? I’ll never forget, man,” Cooper began at about the 29:00 minute mark on the Smartless episode.

“We were living next to each other and Will came into where I was living. I know you’re not supposed to cry on this show. Sorry, it’s just pretty emotional. We had dinner the night before. I’ll never forget it, because Will — who can be mean, but there’s no ill will — but I didn’t know Will *that* well then,” Cooper explained.

“And he was like, ‘Hey man, we had dinner the other night. How’d you think that went?’And I remember being at the dinner thinking I was so funny. And I thought these two guys who were my heroes thought that I was so funny. And I was like, ‘I thought it was great, I thought I was killing it.’ And Will was like ‘You were a real asshole, man. You were a real asshole. And by the way, have your dogs gone out to the bathroom?’ And I was like, ‘Huh? What time is it?’. And that was the first time I ever realized I had a problem with drugs and alcohol, and it was Will saying that to me. And I’ll just never forget it.”

Cooper not only turned his life and career around, but he used his eventual sobriety to help inspire others to change their lives for the better, as both Ben Affleck and Brad Pitt have credited Cooper with helping them get sober.

In the years since that moment with Arnett, Cooper has racked up nine Academy Award nominations and has gone on to become one of Hollywood’s leading A-listers. Now that’s how you turn your life around.