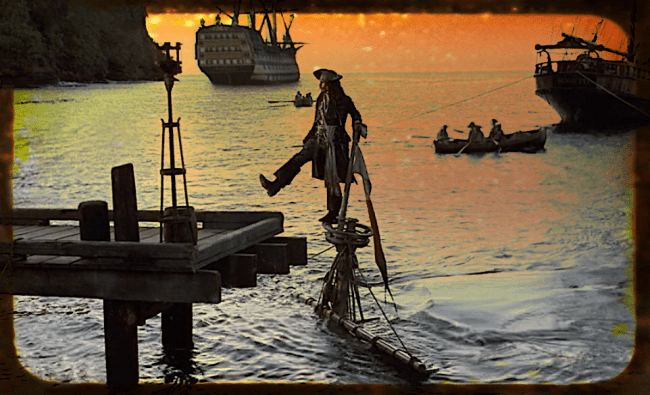 This summer marks the 18-year (!) anniversary of Pirates of the Caribbean: The Curse of the Black Pearl. Disney’s first-ever foray into PG-13 movies was certainly a sweeping success, as Pirates of the Caribbean remains in the Top 15 highest-grossing movie franchises of all-time despite consisting of just five films, with the most recent coming in 2017.

It’s no secret, though, that the Pirates franchise got desperately lost along the way as each sequel is seemingly worse than the last, culminating in the truly terrible Pirates of the Caribbean: Dead Men Tell No Tales, a film that forced Disney to mothball the property entirely, with rumors of a Margot Robbie-led reboot on the way in the coming years.

Still, for all of the sequels’ faults, the original — 2003’s Pirates of the Caribbean: Curse of the Black Pearl —  remains a perfect piece of blockbuster adventure filmmaking, deftly blending action, comedy, romance, and thrills all into one perfectly paced package. In the context of modern blockbusters, a movie this * well-made* is becoming increasingly rare these days, which is a notion that’s perhaps perfectly epitomized by the sheer brilliance of how the film introduced its hero, Captain Jack Sparrow.

Whoa the first Pirates of the Caribbean is perhaps a perfect movie.

That scene, barely more than a minute long, told movie-goers everything they needed to know about the soon-to-be-iconic swashbuckling pirate without even uttering a single word. Here’s how they did it.

The scene opens with Jack staring off into the horizon and striking an epic pose on the top of a ship’s mast. When a camera frames a figure from below, it’s to give them a sense of scope, which therefore translates to a feeling of power — as if to make you feel like you’re looking up at them. This perspective is not only applied to the subject, Jack Sparrow, but his mode of transportation: what appears to be a vast pirate ship.

You’re also seeing the character from the back, which keeps the mystery of what he looks like while also still informing you of who he is: this guy, who appears to be atop of a massive ship, is a leader and a badass.

That sense is only confirmed once given a glimpse at his face, as he’s bearing a confident, determined expression. Yet to say a word, you’re already sold on this being the hero of the story. 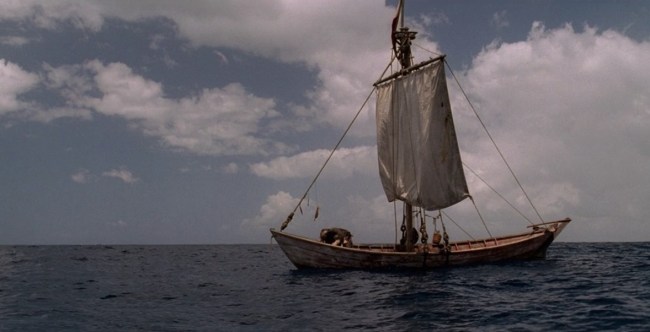 You quickly realize, though, for as epic as his aesthetic may be, the reality of his situation is far from it. The mast that you thought was atop a massive pirate ship actually turns out to be that of a rinky-dink lifeboat that’s quickly taking on water. Jack isn’t sailing, he’s sinking. For as epic as the character may think he is, the world around him doesn’t suggest that his confidence is warranted.

Despite the pitiful reality of his boating situation, Pirates of the Caribbean hammers home that Jack Sparrow is a hero worth rooting for by displaying his adherence to a moral code and his fearlessness in the face of danger.

As he passes by a trio of hung-to-death rotting pirates, the music suddenly shifts to a more downtrodden tone as Jack immediately rises to his feet, removes his cap, and pays respect to his fallen lawless brethren of the sea. This public hanging comes with a warning, as “Pirates ye be warned” is menacingly carved into a nearby piece of plank.

This, of course, does not cause Jack to hesitate for a second, as he instead waves at the sign as if to say “Fair play… because ye be warned as well.” Again, still yet to utter but a word, The Curse of the Black Pearl has already positioned Captain Jack Sparrow as a man of confidence –if perhaps undeserved confidence — comedy, and courage.

Wrapping It All Up Into One Moment

All of these aspects are then wonderfully tied into a bow in the closing moments as Jack arrives at the port just as his quickly-sinking ship fully submerges underwater, calmly stepping onto the dock as his ship disappears behind him.

Again, this is a perfect distillation of the character that audiences will come to know over the next five films: Captain Jack Sparrow, who believes himself to be this epic force, similar to the ship, is actually a doomed vessel. And yet, despite this, not only do they manage to arrive at their destination, but they did so with a sense of cockiness, irreverence, and swagger.

Jack Sparrow, for better or for worse, is and always will be a pirate that will figure out a way to make do — to get done what he needs to get done — regardless of what it takes. A pirate’s life for him.