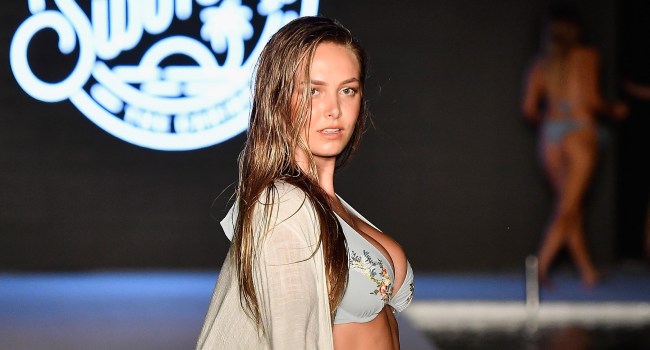 Bret Michaels, best known by one age group as the lead singer of Poison, and best known by another generation as that guy on all those reality TV shows, has a daughter named Raine (yes, this one) who made the final six in the annual Sports Illustrated Swimsuit competition.

Raine is currently a student at Belmont University in Nashville. (Wonder how much he paid for it? I kid.) Recently, he explained in an interview with Fox News how proud he is of his daughter Raine scoring a job posing for Sports Illustrated.

“As a father, I’m there from the cutting of the umbilical cord ’til right now, and I mean her mom too. I’m saying this, both of us, as parents, really, really proud of Raine,” Michaels told us of his oldest kid. “She’s done a great job. She is going to school at a really good university for broadcast journalism. She loves it. She’s in Tennessee doing that.”

He continued: “She’s one of those people who’s a kind soul. She’s humble. At the same time, she’s a fighter. I’m really proud of her. I’m thankful for the views and the votes. Sports Illustrated – because I’m a sports fanatic – I’m so proud of her because it’s also a great magazine for them to get recognized. All of the girls that entered, I give credit to, and the six finalists, it’s amazing.”

Wonder how much he paid to get her that gig? Again, I kid.)

The other models who have made the cut so far include Brooks Nader, Jessica Aidi, Veronica Pomee, Erin Willerton, and Manuela Hernandez.

Will Bret Michaels’ daughter Raine make it all the way to the 2019 Sports Illustrated Swimsuit Edition?

Either way, he’s got her back.

“No matter what happens in her life, I’ll be there as a dad because you want to be a good provider and a good protector, and I also tell her the risks that come with it,” he added, noting that “there’s a lot of great people and people that are going to be behind her and great, and you’re also going to get some people that aren’t great people — whether they are trying to talk her into some bad contract or they’re perverts or whatever they are, you know.

What a guy. I wonder how much he paid to get her into the final six? Kidding! Totally kidding.)