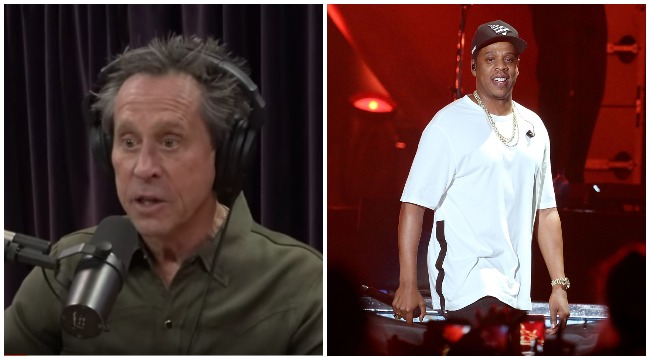 Jay-Z and the word genius are synonymous for people like me, who has never not cheated on a scantron test. For me, it’s easy to point to the rapper’s construction of lyrics, or accolades, or business ventures, or longevity. But, me calling Jay-Z a genius is like Ray Charles calling the Sistine Chapel beautiful. I don’t really know.

That’s why hearing actual geniuses speak about other geniuses is so much more compelling.

Brian Grazer, one of the most prolific film and television producers ever who was named to Time’s list of the 100 Most Influential People in the World, is a genius. His films and TV have produced over $13 billion, have been nominated for 43 Academy Awards and 187 Emmys, and his name is attached to projects like A Beautiful Mind, Arrested Development, Apollo 13, American Gangster, 8 Mile, the list goes on.

Grazer recently sat down with Joe Rogan for a fascinating two-hour conversation that is worth the listen in full, but if you don’t have the time, listen to the clip discussing his relationship with Jay-Z, who hounded Grazer to make a soundtrack for American Gangster.

Jay-Z completing an entire thematic album–the writing, the singing, the producing, the engineering–in three fucking weeks is bonkers. I still have emails I haven’t gotten back to from before the 4th of July.

Check out the entire podcast here.