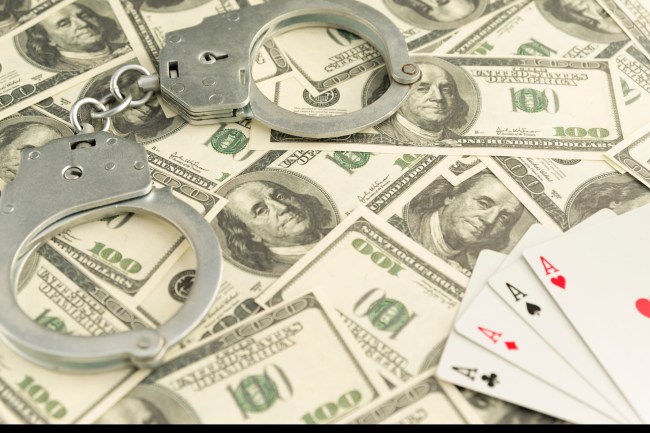 This story coming out of Chicago sounds like an old-timey Chicago mob story but really only because of the names involved. I think everyone reading this article has brushed paths with some sort of illegal gambling operation at some point in their lives, whether it be a friend in college to took bets or knowing someone who knows a guy, etc.

Gambling is EVERYWHERE in America but you don’t often see breaking news like this:

///BREAKING/// Casey Urlacher, the brother of the Chicago Bears legend, among 10 people charged with running an illegal offshore sports gambling ring. Also charged are a Chicago cop and guys with nicknames like “Uncle Mick” and “Sweaters.” Story to come.

Shout out Tim with the A+ reply here:

can’t wait for the rest of this. Uncle Mick, Sweaters, Vinnie, Joey the Glove, Bobby Boulders, Uncle Mustache and of course, Aunt Alfresco.

Fun fact about Brian Urlacher: he’s on Cameo and after the Bears got bounced from the playoffs two seasons ago due to a missed field goal my buddy’s brother paid Brian to send him a heartfelt message about how the hurt and sting from that Bears loss will fade and things will get better with time. That’s really the only fun fact I have about Brian Urlacher other than his brother has now been charged in this sting.

Brian’s brother Casey Urlacher is the Mayor of a tiny village named Mettawa in Lake County and he was charged alongside some dude nicknamed ‘Sweaters’ which I can only hope is because he sweats his ass off year-round and hides it under sweaters, and another guy nicknamed Uncle Mick. The Chicago Tribune has a full rundown of the charges but here’s a snippet:

Casey Urlacher, 40, who is the mayor of the tiny village of Mettawa in Lake County, was charged with conspiracy and running an illegal gambling business. He is accused of acting as an agent for the gambling ring, recruiting bettors in exchange for a cut of their eventual losses.

Also acting as an agent was Nicholas Stella, 42, a veteran Chicago police officer, according to the 28-page indictment. Police Department records show Stella was stripped of his police powers and assigned to desk duty last May. Stella has spent 18 years on the force.
…
…
…
According to the indictment filed in U.S. District Court, the gambling ring operated between 2016 and 2019 and was headed by Vincent Delgiudice, 54, of Orland Park, who went by “Uncle Mick.”

Delgiudice paid a Costa Rica-based sportsbook a service fee to use its online platform and recruited gamblers to place wagers on his website, www.unclemicksports.com, according to the indictment. To cover his tracks, Delgiudice often used encrypted messages to communicate with representatives of the sportsbook, the indictment alleged.

To expand the operation, Delgiudice hired people to act as agents and enlist new gamblers. The agents — including Urlacher and Stella — worked with Delgiudice to collect cash and pay out winnings, and were paid a commission based on a percentage of the gamblers’ losses. (via)

A post shared by Mark Curran for U.S. Senate (@electmarkcurran)

My brilliant solution is to just legalize gambling nationwide. Why should the U.S. government allow hundreds and hundreds of millions of dollars across sports gambling and offshore poker to pass through Costa Rica over the past few decades when they could easily just legalize it stateside and regulate it like it’s done in the UK?

I can’t help but wonder what the government’s approach to enforcing gambling laws will be across America as individual states are now free to choose whether or not they want to legalize sports gambling. On the one hand, sure, if someone’s caught running an illegal gambling ring they’re breaking the law and will be prosecuted. On the other hand, if it’s legal down the street then why would the police devote valuable resources to investigating, arresting, and prosecuting when they could focus their efforts elsewhere?