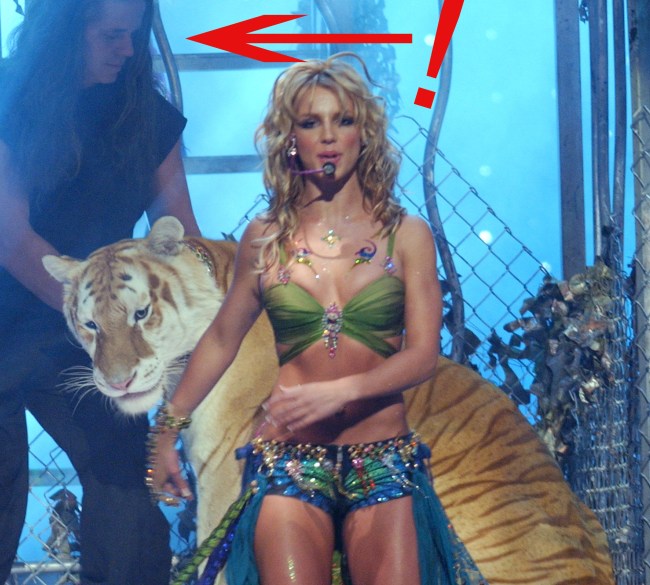 Netflix documentary Tiger King has taken over the world. Especially with everyone forced to remain home due to everything being cancelled.

One of the other players in the sordid saga is Bhagavan “Doc” Antle of Myrtle Beach Safari – a creepy cult-like figure who has multiple female partners and in the documentary appears to groom young women who want to work with big cats into being part of his flock.

Naturally, being that sort of controversial character has led folks on the internet to dig deeper into Antle’s past and what they discovered has people stunned.

Back in 2001, when she was 19-years-old (Antle’s seemingly favorite age for the ladies he “recruits”), Britney Spears put on one of her more iconic performances at the 2011 MTV VMAs. During her performance of “I’m a Slave 4 U” Spears appeared on stage with a menagerie of exotic animals including, you guessed it, a tiger. Guess who else was on stage with the tiger?

Tiger King really is the gift that keeps on giving, and Britney fans are shook.

In fact, they are so shook that they believe Spears was sitting next to none other than Carole Baskin the following year at the 2002 VMAs.

can we talk about how carole baskin was sitting next to britney spears at the 2002 VMAs pic.twitter.com/JYYk7G0let

Can we talk about how Carole Baskin was sitting next to Britney Spears at the 2001 VMAs and the tiger used in the Slave 4 U performance was Doc Antle’s? pic.twitter.com/6jvCzdrO3V

Whether or not that’s actually Baskin or not remains to be seen. The leopard print shirt is certainly her style, but I, and others, are dubious. That being said, stranger things have certainly happened when it comes to Tiger King.

I don’t think that’s Carole, BUT that is 100% Doc Antle. He does destroy women’s lives for sport, so makes sense he’d be involved in Britney’s eventual hostage situation

As for Antle, he and his zoo weren’t very happy with how he was portrayed in the documentary, writing in a since-deleted Instagram post.

“We are very disappointed that our facility was mentioned in the new Netflix series,” the post read. “We can only assume it is because Doc Antle has been such a high profile wildlife personality for so many decades that his association would create more buzz. It is important to understand that this series is not a documentary; it’s sensationalized entertainment with paid participants. Tiger King is the bizarre story of Joe and Carole and their feud. These characters are not representative of experts in the wildlife sector or world class facilities like ours here in Myrtle Beach. Myrtle Beach Safari has been recognized by the state of South Carolina as one of the pre-eminent wildlife facilities in the United States. We’ve also received international accolades for the critical role we provide with our qualified, captive breeding programs and our global conservation efforts of threatened and endangered species.

“Myrtle Beach Safari adheres to all USDA guidelines, and our animals are treated with the utmost care,” they continued. “We have never had a USDA violation and work collaboratively with various state and federal wildlife agencies to ensure our animals receive the very best life each and every day. Over the decades we have heard every sort of fantasy scenario regarding our facility. Many of these less-than-flattering mistruths have been manufactured by those in the animal rights movement that oppose animal ambassador programs of any sort. In the end, we hope you will come visit us and judge for yourself. Every visitor to our facility quickly recognizes the magical place we have created. We remain open during these challenging times with both Day and Night Safari options. Our tours are held outdoors and our 50 acre preserve provides plenty of area for social distance.”

Hard to argue with them when people like The Undertaker and his wife Michelle McCool are fans.