David Spade Interviews Jeff Lowe And John Finlay From ‘Tiger King’ – Michael Jackson’s Alligators, Will There Be A Season 2? 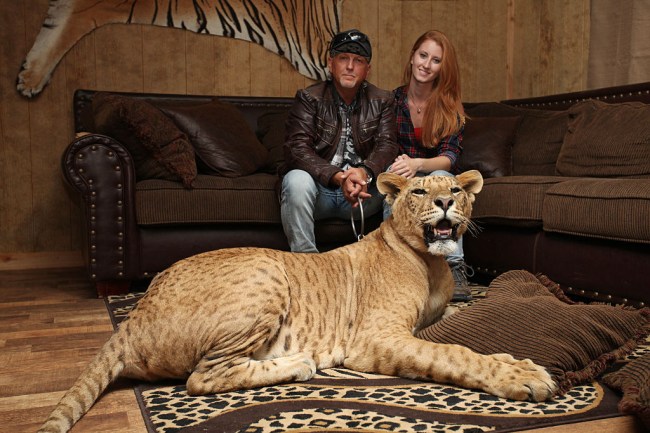 Tiger King is the biggest thing right now. David Spade was savvy enough to interview four key players from the hit Netflix documentary. Jeff Lowe and his wife, John Finlay, and Kelci Saffery gave an interview to David Spade on Lights Out Lo-Fi Chats to talk about Joe Exotic, the possibility of a Tiger King Season 2, and Michael Jackson’s alligators.

John Finlay and his brand new choppers gave an interview to David Spade. “It was painful the first couple weeks,” John said of his new pearly white teeth. “But after I got them fixed the right way, they were perfect.”

Spade asked the Tiger King star: “What is more painful — a weiner tattoo or teeth being fixed?” To which John replied: “I’ve got 51 tattoos, and I think my teeth are actually the worst part of it.”

Finlay said it was the director’s idea for him to appear shirtless in most of Tiger King.

He said that he’s been to Carole Baskin’s Big Cat Rescue sanctuary a couple times.

John went on the record to say he and Joe Exotic were never married and that the pink shirt wedding was all Joe’s idea. Finlay said he is now engaged to his girlfriend. He added that Joe is “completely” out of his life, and his future wife would “wring my neck” if he contacted Joe Exotic.

“I have had several favorite animals, my most favorite ones were probably the alligators and the crocodiles that we had,” John said. “One of the previous managers had gotten us Michael Jackson’s alligators from Neverland Ranch.”

He cautioned that with the alligators and the crocodiles, “you have a lot more to worry about than say a tiger or a bear.”

When asked about the popularity of Tiger King, Finlay said he “had to set up a fan page because of it.” “I’ve had 70,000 followers so far.”

Spade asked Finlay if they make a movie, which Hollywood actor would he want to portray him? “I would have to say Channing Tatum,” John replied. Finlay added that Channing Tatum gave a virtual kiss to his distant cousin Alissa Finlay when she had stage four breast cancer.

Kelci Saffery also appeared on Lights Out Lo-Fi Chats with David Spade. She walked the audience through the fateful day when she lost her arm after a tiger bite off her hand. “I just got complacent,” Kelci said of her accident. She said that the tiger that attacked her was not put down. Saffery said she was back at the park five days after her amputation and seven days after the tiger attack.

She talked about her decision to have doctors chop off her hand instead of attempting to rehab it, which probably would have taken two years. “I heard two years of anything and I was like, ‘No.'” This is the chillest person on the entire planet.

Kelci said that Joe used to be a paramedic, and that was his old jacket that he wore around the G.W. park. Saffery said she “removed herself from the park” in June 2018.

“Joe has a heart, but you learn very quickly that he is very fast to tell you what you want,” Kelci told Spade. “He’s a man as many masks.”

Spade asked Kelci who she thought should play Joe Exotic in a movie, and she said David Spade should play the Tiger King because of his Joe Dirt character.

Spade also interviewed Jeff Lowe and his wife Lauren, with their hot nanny as the special guest.

“There’s no doubt, there’s no question,” Jeff said of Carole Baskin’s guilt. “We know so much more than that documentary showed,” Jeff said. “Netflix whitewashed a lot of it, I think because of legal exposure for something they can’t prove. We have a lot more evidence than what was shown.”

“Sanctuaries are supposed to be closed to the public,” Jeff said. “She’s open to the public, she charges $36 for somebody to go in and see big cats in small cages. So I don’t know how she can justify or differentiate it from what we do. I don’t get it. She’s hypocritical. That’s the problem that Joe had with her besides the lawsuit, she was a big hypocrite.”

“If nothing else comes out of this, she’s been exposed for the phony as she is,” Lowe said. “If she wants to be the big Mother Teresa of big cats, why does she have to have her own collection in cages?”

Joe Exotic is suing Jeff Lowe, the U.S. Fish and Wildlife Service, his lead prosecutor, a federal agent, and others for $94 million in damages for his arrest and conviction.

“If anyone knows a lawyer to take this case on my behalf for a percentage please message me,” Joe Exotic wrote from the Grady County jail. “Thank you all for your kind words and emails.”

In his lawsuit, Joe claims that he was set up by Jeff Lowe in his murder-for-hire conviction.

“He saw us as a paycheck, he asked if he could come out and inspect the zoo we were thinking about buying and give his professional opinion,” Lowe revealed. “Then he told me he was dying, had two years to live at the most.”

“We came here, we bailed him out of trouble, paid all of the bills,” Lowe told Spade. “Then his lawsuits starting burying him.”

“Everyone said we stole the zoo from Joe, that couldn’t be any further from the truth, he was ready to walk, he had the doors closed when we took over,” Lowe said.

Jeff explained what it’s like to be bitten by a big cat. “It sucks. I wouldn’t recommend it. It’s the pressure of the jaw. The teeth aren’t sharp. It just crushes your bones, crushed your arm. It hurts like hell. It hurts for months. It just feels like a big huge bruise for months and months.”

“He made us look like sluts, but its really helping us get laid,” Jeff joked. “So it worked out okay that way.”

Jeff Lowe talked about the possibility of a Tiger King Season 2.

“Everyone’s asking us about Season 2, I don’t know anybody, particularly Carole Baskin, who is gonna wanna cooperate with him [director Eric Goode].”

The “hot nanny” made a cameo and Spade joked, “Woah, she learned how to find the camera.”

“Joe, I’m sorry buddy, but you did what you did, and now you’re gonna serve your time for it,” Jeff said to Joe Exotic.