Britt Slabinski: A Badass Navy SEAL Bro Who Could Do Without The Medal Of Honor 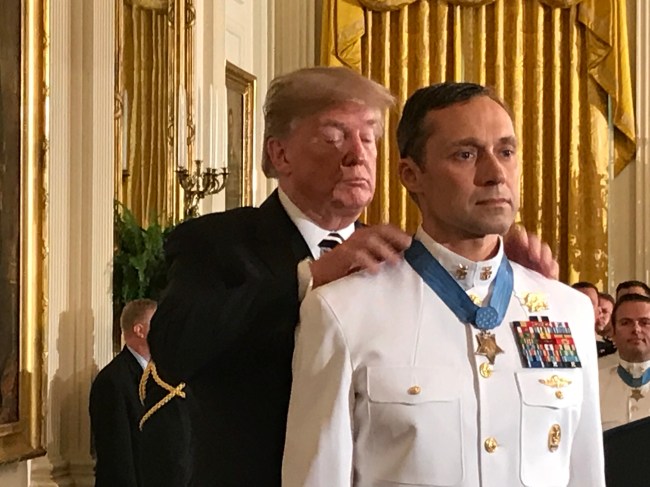 From Bridge Over the River Quoi to Chuck Norris’ Missing In Action, Top Gun, CBS’s new Navy SEALs series and everything in between – entertainment companies often glorify war and those who fight them because Americans love watching a good fight (…and Tom Cruise’s ripped abs).

But the reality is defending American freedoms is often not so glorious, demanding tremendous sacrifice, discipline and a remarkable level of mental toughness and courage. As much as we all love a good Marvel Comics film, our military – and in particular, those serving in the U.S. special forces such as the Navy SEALs, Delta Force and the Army Rangers who are handed our nation’s most challenging military tasks – they are as close to real-life heroes as it comes.

Most of them do not seek glory, but instead simply pursue a lifetime of service to a country they hold more or less above all else.

“I would much rather have the seven men we lost that day back than receive this honor.”

Those were the words of Retired Navy SEAL Britt Slabinksi just prior to receiving the Medal of Honor from President Donald Trump on May 24 at the White House.

Forget “Thor” or “Captain America” (although I do like the new beard). Slabinski is a real American hero and here’s his story:

After the September 11 terrorist attacks, Slabinski was part of one of the first group of special forces sent into Afghanistan. On March 2, 2002, he led a team by helicopter to the top of a 10,000-foot, snow-covered mountain. As they tried to land, the helicopter was riddled with rocket-propelled grenades and small arms fire from Al Qaeda forces. One of Slabinski’s men, fellow SEAL Neil Roberts, fell out of the aircraft. The helicopter crashed in the valley below and ultimately, after commandeering another aircraft, Slabinski made the decision to go back in and get his teammate. 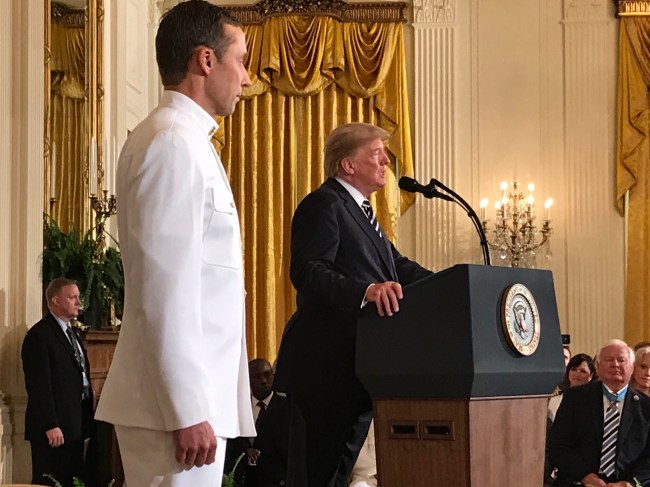 “I kept repeating the Boy Scouts oath to myself – on my honor I will do my duty,” he recalled. “I knew we had to go back in and try to rescue Neil.”

Despite knowing his remaining team of five would be outnumbered and outgunned, Slabinski led his men back where they once again landed and immediately took heavy fire. One man, Air Force Sgt. John Chapman, was killed almost immediately. Then Slabinski charged fearlessly into machine gun fire at close range and called in air strikes to support his team’s position.

He eventually maneuvered his team down the face of the snow-covered mountain, carrying an injured teammate, helped stabilize casualties and continued fighting until a larger team of Army Rangers could land, capture the mountain and extract Slabinski’s team 14 hours later. And for his valor, Slabinski received the nation’s highest military honor from the president some 16 years later.

“The greatest irony is the discomfort I feel to receive the nation’s highest military award for a day I wish would have never happened,” he said, noting the Medal was not just for him, but his entire team. “We rarely get to choose our crucible moments, their timing or the circumstances. They happen, and we are measured by the response. The best we can do is prepare for them, knowing they will arrive. I received an honor for actions from March 2002 – a day I did nothing special. I just did my job. My teammates – they were special.”

Much like Patrick Swayze’s “Dalton” in the greatest film known to man, Roadhouse, Slabinski is smaller than you might expect for a certifiable American badass at 5’10 and maybe 175 lbs. soaking wet. He’s just fine with being underestimated, noting that what sets Navy SEALs apart is the unmatched strength of spirit and commitment to duty before all else.

“We all knew what we signed up for,” said Slabinski. “We all knew the risk of going back after one of our teammates. And the soldiers who rescued us – the rescuers – they also knew the risks. But our task was valiant and worthy. I wish it wouldn’t have happened. I wish all of those guys were here with us. But something that day had to be done, and we did it for love — love for those at home, and love for those there to our left and right.”