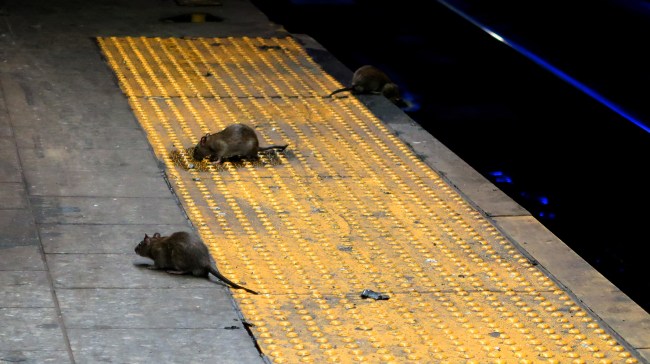 Growing up on Siesta Key, Florida I didn’t really see rats. I’d see discarded orange peels from rats who would eat the fruit in the middle of the night but I’d rarely if ever see the culprits. Then I moved to NYC after college and within a year I think I’d become completely desensitized to the existence of rats.

My second apartment in NYC was a 7-bedroom townhouse on 80th and Lexington in the UES where I lived with 5 roommates/friends from college. I was on the ground floor, the ‘garden level’. Within a month of moving in, we purchased some airsoft guns because the rats would run off the patio in the back, through the crack in the door, and into the house. The airsoft guns didn’t kill or even really deter the rats but it gave us a false sense of security up until a rat ran over one roommate’s pillow in the middle of the night and that’s when we got the landlord to seal up every window and door in that outrageous townhouse.

But the idea of a mythical ‘rat king’ where a hive of rats are living in such close proximity that their tails have grown intertwined until they begin to feast on each other and one giant cannibal rat emerges as the King Rat. That’s the real fear. And that’s what it sounds like this guy in The Bronx fell into when a sinkhole opened up and he fell 15-feet down into a massive hive of enormous rats. I’d say this is my ‘worst nightmare’ but I’ve probably got a few of those so I’ll say this is right up there with my worst nightmares.

In one of the surest signs of an impending apocalypse we have yet seen, a New York City man fell about 15 feet into a pit of rats when a sidewalk sinkhole opened under his feet. The ground simply split and swallowed its victim, 33-year-old Leonard Shoulders, as he waited for a bus on Saturday afternoon. Shoulders survived, albeit with a few broken bones, but his family says he is “deeply traumatized.” Which, yes.

The hellmouth reportedly wrenched open on Third Avenue near 183rd Street in the Bronx. One minute, Shoulders was just standing there, his mother — Cindy White — told NBC 4 New York; the next, “it was like a suction,” she recalled. “He just went down.” Surveillance footage corroborates her account: Shoulders took one step forward and the concrete ate him.

During his descent, “debris was falling and hitting him in the head,” White added. When Shoulders finally landed, White continued, he found that he was not alone. “He was like, ‘Ma, the rats down there were ridiculous.’ He was like, ‘They were like so big.’ He was scared to yell out because he thought they were gonna go in his mouth.” He kept his jaw clamped closed and instead waved at the onlookers gathering at the cavity’s rim — a wise decision, given recent reports of heightened rat aggression. (via The Cut)

According to the report in The Cut, it took firefighters in The Bronx about half an hour to rescue him from the 15-foot sinkhole full of rats where he was afraid to scream out in terror for fear that a rat would crawl into his mouth, all while he was lying there with broken bones.

Halloween is this week. On a Saturday. During a full moon, a Blue Moon. The gates of the underworld are surely opening up this week in anticipation of this cosmic event, right? This feels like the first Ghostbusters where peculiar events were all leading up to some cataclysmic event. Obviously, I’m not being serious…but am I? 2020 could throw anything our way at this point and we couldn’t be shocked.