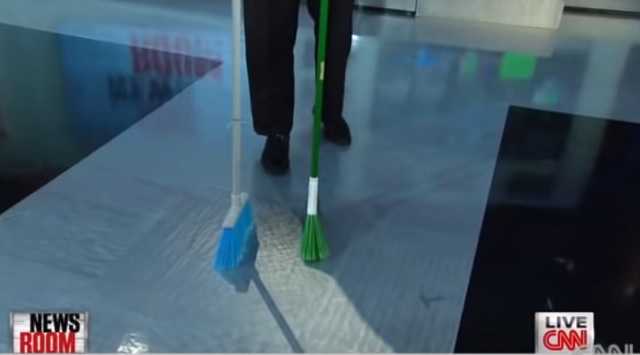 The broom challenge has become the biggest viral craze of 2020 but the theory going around about NASA and gravitational pull making your broom stand up is nothing more than a myth.

According to the Internet NASA says today is the only day a broom can stand up on its own because of the gravitational pull.

Okay so NASA said today was the only day a broom can stand up on its own because of the gravitational pull…I didn’t believe it at first but OMG! 😭😭😭😭😭 pic.twitter.com/M0HCeemyGt

After the initial video went viral, hundreds of people have been astonished to learn that they now have the ability to get their broom stand up on its own.

She just made me mad😂😂😂😂 Twitter this better not work tomorrow 🤣 pic.twitter.com/5tfo91BwSE

AYE I DIDNT BELIEVE IT AT FIRST EITHER 😂😂 pic.twitter.com/zHTopEtKah

The broom-gravitational pull Internet myth isn’t new. Back in 2012, CNN disproved the myth and revealed that you can get your broom to stand up on its own on any given day of the year.

#1 Your Broom will do this any day of the year. It has to do with the shape of the bottom, not the Earth.
#2 The Tilt of the earth is always ~23.5° it never changes during the year. The orbit of the Earth around the sun causes Seasons.
#3 Social media makes us do silly stuff. 😊 pic.twitter.com/dqm04IFwPp

Some of y’all have never tried to stand a broom up on its own and it shows.

My Physics degree having ass is having a great time looking at y’all videos and pictures doing this. But it’s not because of the equinox, eclipse, or planet alignment for those saying it. It also can be done almost any day https://t.co/9sIanbZ4Uc

It's a total myth that you can only balance a broom or egg on its end during the equinox. But we decided to celebrate the official first day of #spring with a broom balance anyway! 🌺🌸🌷 pic.twitter.com/Bv7her4yRw