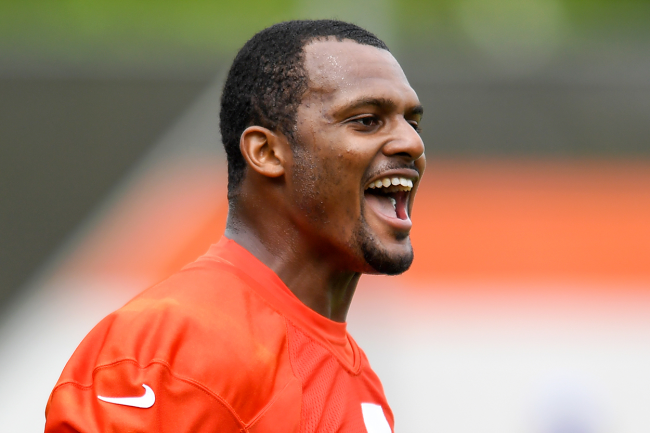 A new era has begun in Cleveland with Deshaun Watson at quarterback. Although it is unclear as to whether the Browns will be able to play their new signal-caller this fall, but they are operating as if he will be the starter come Week 1.

Earlier this spring, Watson took the vast majority of his new offensive teammates to the Bahamas for a very expensive team-bonding trip. Since then, he has been in The Forest City getting acclimated during OTAs.

He has looked really solid thus far in the limited clips from practice.

However, on Wednesday, the Cleveland defense got its revenge for the lack of invite to the beach. Safety John Johnson III picked off Watson and returned it the other way for a hypothetical six.

As soon as Johnson got his hands on the pass, his defensive teammates went absolutely bonkers. They proceeded to hoot and holler all the way down to the end zone, laughing and pointing in Watson’s direction along the way. It was pretty lit.

Obviously, the looks from practice are limited at this point. But Watson’s short time in Cleveland has clearly been pretty successful if the defense is going as crazy as they did after just one interception.

It will be curious to see if the Browns can turn a page with their new quarterback in town. At the very least, there seems to be a new, reinvigorated energy around the organization that is palpable.