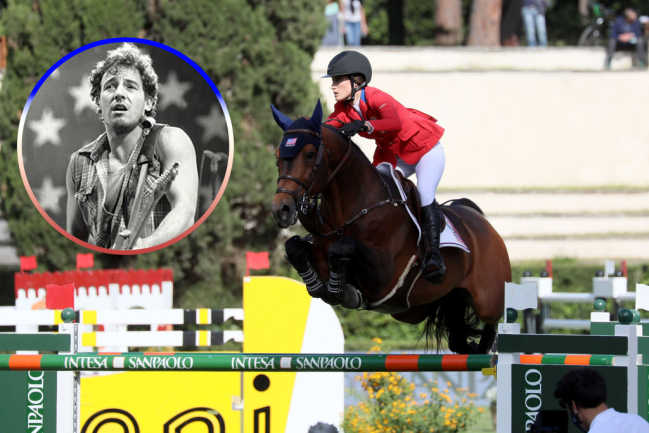 Jessica Springsteen was ‘Born in the U.S.A’ and now she is set to represent her country in the Olympics this month. The 29-year-old daughter of rock star Bruce Springsteen has been chosen for the United States’ equestrian roster for the Tokyo Games, the team announced.

Springsteen, who is ranked 27th in the world, was selected to the Olympic show jumping team for the first time. She will be riding Don Juan van de Donkhoeve, a 12-year-old Belgian Warmblood stallion.

Considered young by equestrian standards, Springsteen has achieved quite a bit in her sport. She will be joined by two teammates in their 40s and one in her 50s— all of whom have already competed in at least one Olympic Games.

While Springsteen is a legitimate medal contender, she draws more attention than most 27th-ranked riders. Not only is she the daughter of a music icon, but she previously purchased a gold-medal-winning horse and wears only the finest riding wear.

Her custom-made Parlanti boots feature magnets on the bottom to stick to the stirrups undeniably stand out amongst her competitors.

Don’t get it twisted— she has burst onto the scene and boasts strong finishes at big-name equestrian hubs like Rome, Windsor and St. Tropez.

She has earned her Olympic selection and will be a big component in the success of Team USA.

Show jumping is an event in which horse and rider jump over a series of obstacles as high as five feet during a set time limit. The goal is to complete the course as quickly as possible without incurring a penalty.

Who will represent the U.S. in show jumping?

The U.S. equestrian has named four members to its jumping team.

Show jumping is one of three Olympic equestrian events. In “dressage,” horses are judged on precise movements. There is also three-day “eventing” that combines show jumping and dressage, and adds a cross-country race over hurdles.

The United States is tied with Germany for the most all-time Olympic medals in equestrian. Team USA has earned 11 gold, 21 silver, and 20 bronze medals.

Equestrian competition in Tokyo will begin on July 24 and finish on August 7. To see Springsteen, the jumping events will take place from August 3 to 7.