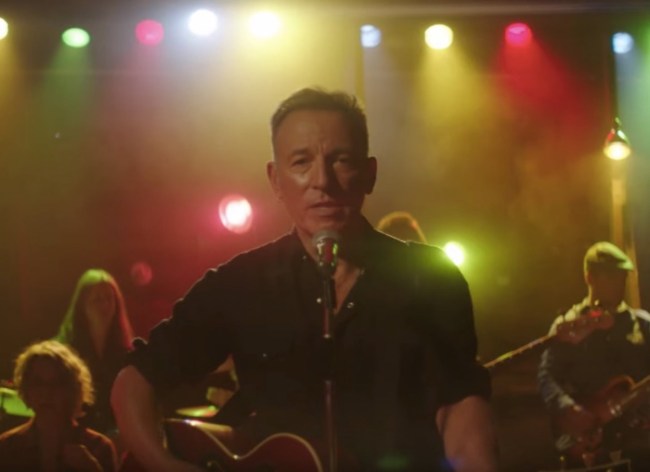 It has been a solid five years since Bruce Springsteen last released an album so fans across America were extremely excited to wake up and find that The Boss had dropped Western Stars, a 13-song new album that was accompanied by a music video for the eponymous track.

Music videos have been dead on TV for years but they’re alive and thriving on YouTube where the vast majority of the world consumes most of their music. This is VINTAGE Bruce Springsteen. It’s a man, strumming the guitar, drinking whiskey alone at the bar, and staring ominously off into the distance in the Grand Canyon.

Western Stars is the fourth song on the album of the same name that dropped at midnight (Thursday night after the NBA’s Game 6) and it’s the song that Bruce chose to tease this full album. Here’s that new video:

If we’re being completely honest here, I can’t help but think that Bruce Springsteen took the inspiration for his new album art from Lil Nas X. They’re eerily similar:

The full Western Stars album is available for streaming on Spotify and other places you might get your music from. I’m a Spotify user so that’s what I chose to include here:

Bruce Springsteen’s said this album was heavily influenced by ‘Southern California Pop Music’ of the 1970s which I’m not necessarily getting from the title track but I haven’t had the chance to devour the full album yet and I expect to see those elements throughout if that’s what The Boss says it’s all about.

NPR traces the origins of Western Stars back 30 years:

It’s possible to trace the path taken by Springsteen’s new, highly orchestrated solo album, Western Stars, all the way back to his decision to cover “The Ballad of Easy Rider” thirty years ago. McGuinn’s rendition in the film is relatively spare, but his band The Byrds released a version featuring a string section, added by producer Terry Melcher, to up its odds of becoming a Top 40 hit in the style of popular crooners like Glen Campbell. In Springsteen’s take (findable on YouTube) Danny Federici’s trickling piano lines fill in for the strings, echoing their presence in a ghostly but convincing way. Now, all this time later, Springsteen has found his way to those strings. (via)

To read the full review of Western Stars on NPR you can click those links above! In the meantime, you can get to streaming the full album on Spotify with that embed in the middle of this article.