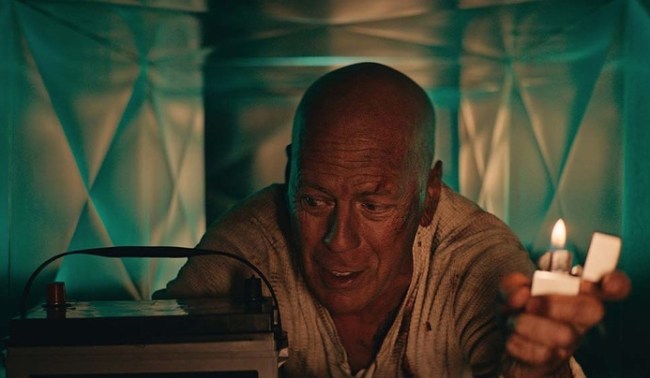 We haven’t seen Bruce Willis as the beloved John McClane since 2013’s A Good Day to Die Hard, which wasn’t particularly well-received by critics and fans alike. For die-hard fans of Die Hard, you get to see John McClane back in action…but the catch is that it’s John McClane hawking car batteries.

Advance Auto Parts noticed their DieHard car battery line has the same name as the treasured 1988 Christmas movie, which has been verified as a holiday film by the NYPD and LAPD. The marketing team somehow got the 65-year-old Bruce Willis to crawl around air vents once again, but this time McClane doesn’t have glass shards in his bare feet, but the hard-nosed NYPD cop is lugging around a heavy car battery.

Not only did Advance Auto Parts have the budget for some stunts and special effects that of the level of Walker, Texas Ranger, but the auto parts purveyor also had enough money to hire De’voreaux White, who played limo driver Argyle in Die Hard, who steals McClane’s iconic line of, “Yippee Ki Yay,” but without the expletive ending.

In the commercial, John McClane is stranded after his car battery dies. Then out of nowhere, terrorists start attacking McClane; one of them is Hans Gruber’s computer hacker Theo, played by Clarence Gilyard Jr., who disabled Nakatomi Plaza on Christmas Eve in the movie.

“Come out to the auto parts store, we’ll get together, have grab a few radiators.”

Amidst being hunted by terrorists, the wise-cracking McClane calmly purchases a car battery at Advance Auto Parts, as one does. Then needs an escape route, which is of course is an air vent.

“I’ve never done any sort of commercial with the John McClane character, but Advance Auto Parts brought an idea to integrate DieHard the battery into the Die Hard story through a short film that’s authentic to McClane and both brands,” Willis said in a press release. “Advance approached this like a motion picture – the script is clever, the production intense and the spot is entertaining. This is what Die Hard fans expect. I think they will dig the DieHard – Die Hard mashup.”

There have been rumors for years about another Die Hard movie, possibly a prequel that takes place in the late 1970s. Len Wiseman, director of Live Free Or Die Hard, said he wants to do the project with Willis.

“We’ve never seen the actual love story,” Wiseman said in 2016. “We know its demise, but we’ve never seen what it was like when he met Holly, or when he was a beat cop in ‘78 in New York when there was no chance of him making detective. It’s always been something I’ve been thinking about, and now we’re doing it. And it ties in.”

“The reason I say prequel/sequel is because I wasn’t going to do it without Bruce,” Wiseman continued. “I’m also not going to do it with Bruce being a cameo bookend gimmick. It’s really working into the plot, with the ‘70s having ramifications on present-day Bruce. It inter-cuts in a very fun, imaginative way with present-day John McClane.”