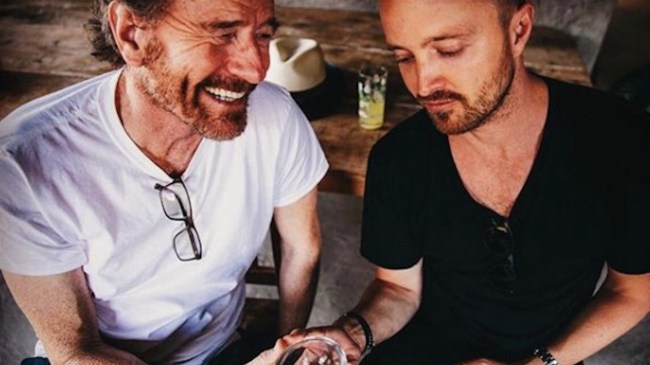 There’s being played for an utter fool and then there’s how Bryan Cranston and Aaron Paul dunked on everyone with their recent viral marketing Instagram campaign.

A couple of weeks back, beginning on June 25h, Breaking Bad stars Bryan Cranston and Aaron Paul began simultaneously posting cryptic Instagram photos, leading everyone on the internet — myself included and, perhaps, most especially — to believe that we were on the verge of something, anything regarding the upcoming Breaking Bad sequel.

And as it turns out, Paul and Cranston we’re just playing us all with Heisenberg-ian levels of deception, as the viral marketing campaign was for nothing more than a new liquor they’ve partnered on.

“Three years ago we sat in a sushi bar in New York. Talking about life and what we could possibly do down the road together. We had the time of our lives while shooting Breaking Bad and truly built a very special bond. Knowing that we couldn’t share the screen for quite a while – our thoughts turned to a new project. We sipped cocktails and thought about what it should be. The younger one looked at his drink and said, you know what we should do? We should do a really special Mezcal,” Paul and Cranston explained on Instagram.

Now, to be clear, the Breaking Bad sequel is still very much on the way and Bryan Cranston may still be very much involved, but to use the intense fan anticipation for the film as a way to build awareness for your new Mezcal brand is an absolutely diabolical move.

And while I respect the hell out of it, that doesn’t mean that I’m not totally butthurt that I got completely and utterly played.