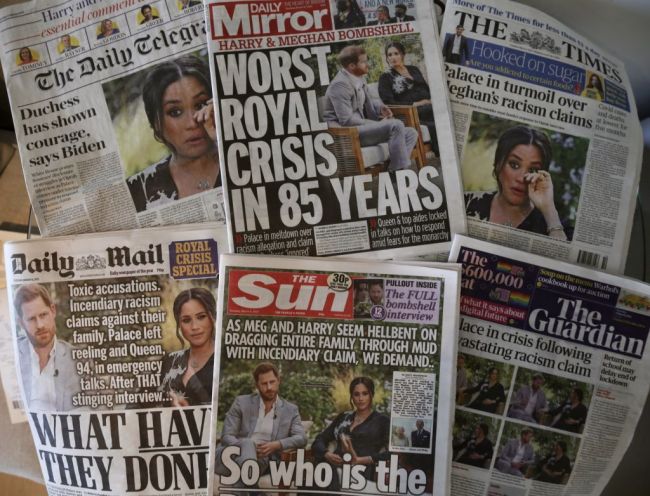 Two days after Sunday night’s massive interview with Oprah Winfrey — which drew over 17 million viewers in the United States — that saw Prince Harry and his wife Meghan Markle claim that a member of the Royal Family expressed “concern” about the skin tone of their first child, Archie, before his birth, Buckingham Palace has released a brief, official statement in regards to the allegations.

“The whole family is saddened to learn the full extent of how challenging the last few years have been for Harry and Meghan,” the official statement begins.

“The issues raised, particularly that of race, are concerning. While some recollections may vary, they are taken very seriously and will be addressed by the family privately.

Harry, Meghan and Archie will always be much loved family members.”

On the Monday morning after the interview aired in the United States, Oprah appeared on CBS This Morning and mentioned that Harry wanted her to clarify that it was neither Queen Elizabeth II nor Prince Phillip who made the comments about his son Archie.

In addition to the allegations regarding concern over her son’s skin tone, Meghan also claimed that she was denied help after seeking mental health treatment for suicidal thoughts.

Earlier this morning, Prince Charles — who is Britain’s heir-to-the-throne — made his first public appearance since the Oprah Winfrey interview, however, he did not comment on the matter when asked about it.

Britain's heir-to-the-throne Prince Charles made his first public appearance since Meghan and his son Prince Harry's interview with Oprah Winfrey and didn't comment when asked about it https://t.co/GtMI3FNKjb pic.twitter.com/WXUYx80O1e

The interview is obviously raising all sorts of hell in England, as Ingrid Seward, the editor-in-chief of Majesty magazine, recently told The Guardian: “It’s probably the most damning condemnation of the royal family and how they operate I’ve ever heard.”

Meanwhile, you’ve got Piers Morgan, a long-time critic of Markle’s, storming off of the set of his television show Good Morning Britain live on-air after his co-host Alex Beresford called him out for his treatment of the Duchess of Sussex.