Bud Light Enters Console Wars With A Gaming System That Keeps Your Beers Cold – For $80,000! 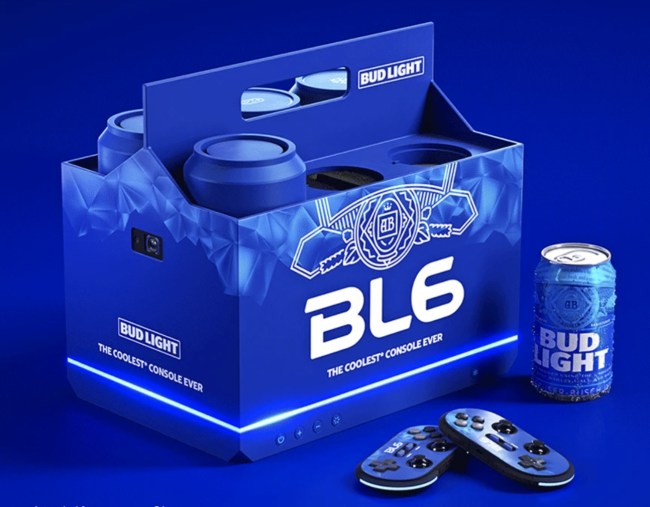 While Sony and Microsoft battle each other in the video game console wars…Player 3 has entered the game. Looking to compete with the PS5 and the Xbox Series X, Anheuser-Busch has revealed the BL6, a gaming console that keeps your beer cold, giving it an instant advantage over the other next-generation gaming consoles, but it will cost you more than an arm and a leg.

Bud Light has released the BL6, “the world’s first-ever self-cooling six-pack that also plays video games.” It is one part koozie, one part video game console, and one part projector, and 100% drunken awesomeness. There is a 720p ASUS projector built in the unit so that you can beam your gaming onto a wall, a tent, or just about anything.

The unit has 16 gigabytes of memory and comes pre-loaded with six games on the console: Tekken 7, SoulCalibur VI, Flashlight: Freeze Tag, RBI Baseball 20, Broforce, and an original game from Bud Light called Six Puck, which is a twist on air hockey. There is also two built-in koozies that keep your beer cold, and also helps the CPU from overheating, which is way better than computer fans.

Honestly I have no idea how we did it either. #BL6 @Xbox @Playstation pic.twitter.com/IMg6nDF4r6

While it may be tough to get your hands on a PlayStation 5, it will be darn near impossible to snag a BL6. That’s because there is only one of these unique and very limited edition consoles available. To acquire the one-of-a-kind contraption, you’ll have to outbid fellow boozy gamers. At the time of publication, the BL6 has an insane auction price of over $80,000! You might want to invest in a mini-fridge and a PS5.

The money will go to a great cause, all proceeds will be matched by the Bud Light team and donated to the National Restaurant Association Educational Foundation supporting their “Change is on the Menu” program. You can bid on the BL6 HERE.

RELATED: The Experts Have Voted, These Are The Best Beers And Breweries In 2020

RELATED: ‘Strongest Beer In The World’ Sells Out In Hours…But Is It Truly A Beer?