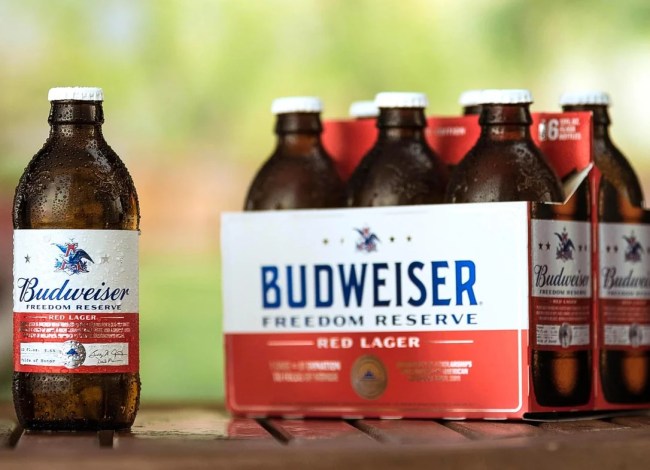 Budweiser is debuting a new patriotic beer that is based on a 261-year-old recipe from George Washington. For the summer, Budweiser is offering the limited-edition Freedom Reserve Red Lager, which Washington wrote the recipe back in 1757. The best part is that proceeds from this American ale goes to a great cause.

George Washington is known for being the first President of the United States and one of the country’s Founding Fathers. But did you know that G.W. wasn’t shy about tipping a few back. The American Fabius had a love of booze of all kinds as evidenced by Washington’s farewell dinner on September 14, 1787. The epic bash had 60 bottles of claret (a red wine from Bordeaux), 54 bottles of Madeira (a wine made in the Portuguese Madeira Islands), 22 bottles of porter, 8 bottles of cider, 8 bottles of whiskey, and 7 large bowls of punch. That’s quite the boozy spread and it’s rather insane when you realize that the “dinner” was attended by only 55 people. Adjusting for inflation, that would be a bar tab worth $15,000.

Washington didn’t just drink booze, he made it too. In 1799, Washington owned the largest whiskey distillery in the country. The full-fledged distillery with five stills produced 11,000 gallons of clear, un-aged whiskey in 1799 and sold it for a total of $1,800, which is approximately $120,000 in today’s money.

Washington also brewed his own beer and had his own special recipe. According to the New York Public Library, Washington hand-wrote an entry in his military journal titled “To Make Small Beer” in 1757.

“Take a large Sifter full of Bran Hops to your Taste — Boil these 3 hours. Then strain out 30 Gall. into a Cooler put in 3 Gallons Molasses while the Beer is scalding hot or rather drain the molasses into the Cooler. Strain the Beer on it while boiling hot let this stand til it is little more than Blood warm. Then put in a quart of Yeast if the weather is very cold cover it over with a Blanket. Let it work in the Cooler 24 hours then put it into the Cask. leave the Bung open til it is almost done working — Bottle it that day Week it was Brewed.”

#NYC Here are the instructions for George Washington’s “Recipe for Small Beer,” straight from his 1757 notebook https://t.co/pSz3iOuIfi pic.twitter.com/Alu2osmQJx

Now Budweiser is honoring the Father of America with a limited-edition beer that uses Washington’s recipe. The Freedom Reserve Red Lager is a summer beer that is brewed by the veterans that work at Budweiser. A portion of the proceeds will go to Folds of Honor, a nonprofit organization that offers educational scholarships to spouses and children of injured or fallen soldiers. The red, white, and brew will be available nationwide starting on May 1st and will be sold until the end of September.