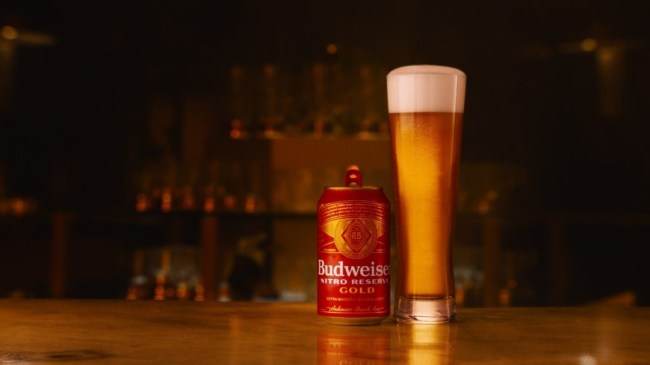 Nitro cold brew (NCB) coffee is currently having a big moment right now. But the nitrogen-infused beverage movement all started with Guinness way back in 1959. That’s when a mathematician named Michael Ash changed the beer world by using nitrogen to “carbonate” draft brews to provide a frothy, dense head. CO2 bubbles absorb other CO2 bubbles to become larger bubbles, whereas nitrogen provides tiny bubbles because it doesn’t dissolve as well, giving the beer a thick and creamy head.

Now Budweiser will tap into the nitrogen scene with their new Nitro Reserve Gold beer. On Monday, Anheuser-Busch unveiled their new bubbly brew and explained how to activate all that nitrogen goodness without having the can explode. And against your better judgment, Budweiser says to shake this beer.

Budweiser Nitro Reserve Gold beer is a new golden lager infused with nitrogen gas with a “bold taste and smooth finish,” according to Anheuser-Busch. The nitro-infused beer has “notes of toasted caramel malt for a bold, flavorful taste” and is 5% alcohol by volume (ABV).

“We’re very excited about the introduction of Budweiser Nitro Reserve because it meets the growing demand for premium products and the rise in popularity of nitro infused beverages, said Ricardo Marques, VP Marketing Core & Value Brands at Anheuser-Busch. With its unique serving ritual, Budweiser Nitro Gold produces a beautiful cascade visual and delivers a silky-smooth taste due to smaller, denser bubbles.”

But to activate those beautiful foamy bubbles, you need to flip the 12-ounce can three times to infuse the nitrogen gas bubbles throughout the beer, and then going against your inner beer lover, you’ll pour the liquid gold straight down the middle of the pilsner glass. You’ll need to give the beer a little time to start bubbling up.

Anheuser-Busch’s Master Cicerone Max Bakker, one of only 18 world-renowned beer experts to have earned the illustrious title, confirmed that the process of three shakes and the hard pour was the optimal way to enjoy Nitro Reserve Gold beer.