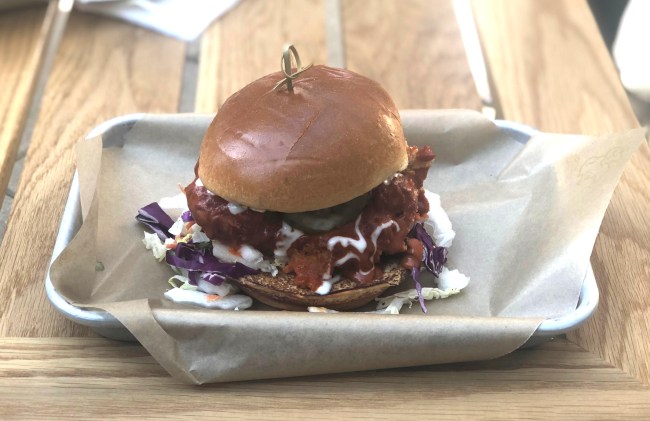 A couple of weeks ago, Popeye’s fired a shot across the bow of Chick-fil-A when it announced it was introducing a new menu item in the form of a suspiciously familiar chicken sandwich and inadvertently launched an all-out war.

It was a feud that seemed like it was straight out of Coming To America, with Popeye’s serving as the McDowell’s to Chick-fil-A’s McDonald’s, as the Louisiana-based chain’s sandwich is virtually identical to their competitor’s with the exception of the addition of mayo (although Chick-fil-A wasn’t shy about reminding people which one came first).

Bun + Chicken + Pickles = all the ❤️ for the original. pic.twitter.com/qBAIIxZx5v

The hype around Popeye’s new sandwich is very, very real and people have been standing in seemingly endless lines in an attempt to get their hands on it to a point where the restaurant recently announced its supply has been exhausted across the country.

However, there’s now a new kid on the block that might be able to fill the void.

Nashville might be best known for its music scene but it has plenty of other things to offer—including the legendary culinary creation that is hot chicken, which is easily one of my favorite regional delicacies in the United States.

If you’ve been to Nashville and never had hot chicken, I’d argue you’ve never really been to Nashville, as no visit is complete without stopping by Hattie B’s or one of the other institutions serving up the spicy treat, which is deep-fried before being covered in a cayenne pepper-based paste.

However, thanks to Buffalo Wild Wings, you no longer have to make the pilgrimage to Tennesee if you’re looking to get your hands on hot chicken, as the chain recently announced it’s serving up its own interpretation of the hallowed poultry, which I recently got the chance to try.

Before I continue, I should probably address the elephant in the room, as I’m assuming some hot chicken purists instinctively recoiled when they looked at the picture above.

Traditionally speaking, Nashville hot chicken is served on white bread and topped with pickles, and if you have eyes, you can see that’s clearly not the case with Buffalo Wild Wings’ interpretation, which features the addition of a cabbage slaw, Fresno chiles, and ranch to help keep your taste buds in check.

As a result, I’m a bit hesitant to compare it to the hot chicken I’ve had in Nashville, but while it might not be the most authentic thing in the world, that doesn’t mean it’s not pretty damn tasty.

B-Dubs’ sandwich features chicken covered in a Lagunitas-based beer batter, which provided a satisfying crunch that was only amplified by the slaw. I will say I was hoping for more of a kick from the hot sauce (which is neutered even more by the ranch) but it still left a pleasant tingle in my mouth.

Buffalo Wild Wings also eschewed white bread for a challah bun, and at the sake of sounding sacrilegious, I might have actually preferred their choice of carb.

At the end of the day, Hattie B’s fans are probably going to be a bit let down by this sandwich but it’s still a very solid menu option. Sure, it might buck tradition a tad, but the final product holds its own despite its lack of authenticity.

I don’t know if Buffalo Wild Wings will end up winning the Chicken Sandwich Wars but I salute them for making a valiant effort.