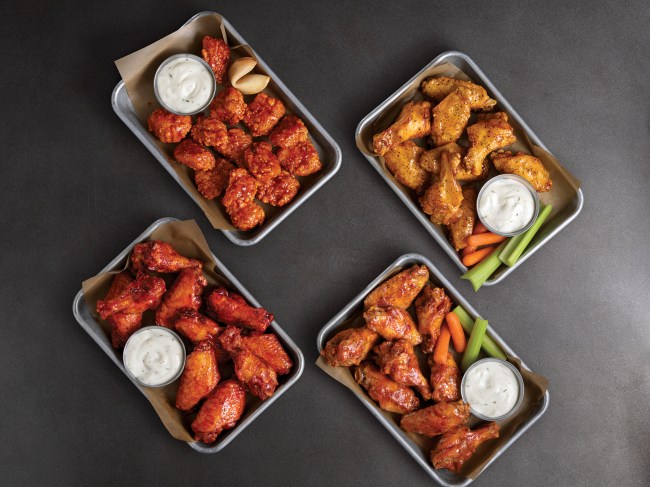 The vast majority of commercials exist in an alternate universe where advertisers rely on viewers not to think too hard about how animals not only managed to land a job interview but presumably beat out a number of human candidates vying for the position or why the biggest soda brands in the world have suggested their flagship product is capable of serving as the catalyst for world peace on multiple occasions.

Over the years, sports bars have dreamed up a variety of ways to lure people in but they typically fall victim to the same phenomenon thanks to a number of recurring themes, including:

While the unbridled enthusiasm that’s usually on display may have once come off as unrealistic, the events that have unfolded over the course of 2020 have made it seem much less far-fetched. I’m pretty sure I’m going to feel almost as exhilarated as the actors in those ads when I finally get the chance to post up inside a bar with a few buddies for the first time in ages, where we’ll go Full Cliché by ordering a bunch of wings and making our way through some pitchers of beer while getting irrationally invested in multiple games we don’t have any emotional stake in.

I have no idea when that day will come but I recently had the chance to get a taste of the good old days courtesy of Buffalo Wild Wings, which just added four new members to its sizeable family of 26 sauces. It’s safe to say this taste test was markedly different than the one I conducted the last time I got the chance to try the newest additions to its menu, as I had to recreate the dining experience within the confines of my apartment. Sadly, I don’t have multiple televisions on my wall, but thankfully, I was able to do what I could to replicate the environment thanks to an ample supply of cold beer and a bottle of Buffalo Trace (although I had to settle for the standard offering as opposed to the exclusive Single Barrel B-Dubs rolled out over the summer).

It’s hard to go wrong with any of the newly unveiled options that covered the wings I sampled (of both the traditional and boneless variety), but in the end, only one could reign supreme in the power rankings I’ve put together for your consideration. 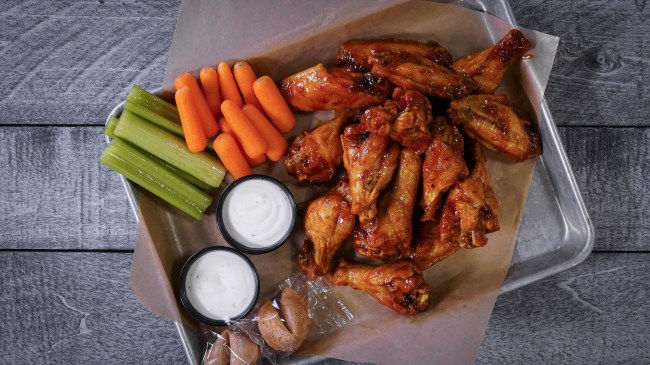 I’ve ordered orange chicken from a number of different Chinese restaurants over the past six months or so more frequently than I care to admit so I like to think I become a bit of an expert when it comes to judging the quality of the unofficial dish of mall food courts everywhere.

While the citrus flavor isn’t as strong as another sauce we’ll get to in a bit, it still comes through and the coating manages to avoid falling victim to the all-too-common mistake of going overboard on the sweetness. I’m a longtime member of Team Bone-In but I actually preferred the alternative here, as the boneless were a nice upgrade from the orange chicken I’ve become accustomed to by virtue of a comparatively thin layer of sauce that allowed them to maintain a crispiness that you rarely encounter in your typical takeout meal.

If you’re looking for even more of a crunch, you’ll be able to get one thanks to the fortune cookie that comes with every order, 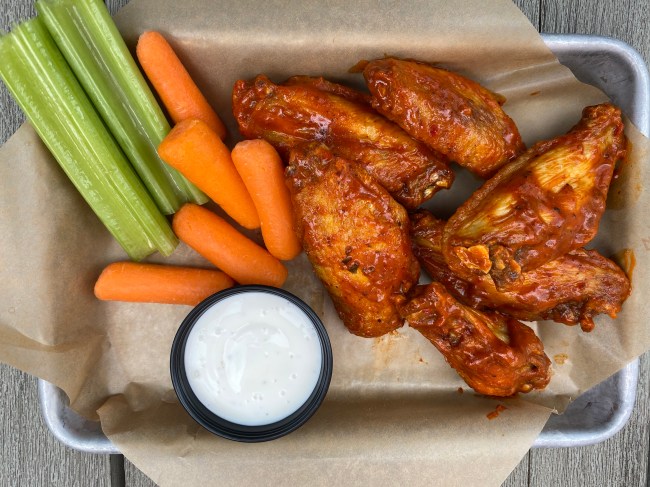 Disclaimer: I failed to do my due diligence before taking my first bite of these wings, which came in a container that was simply labeled as “Blazin.'” I was under the impression they were covered in buffalo sauce that had a bit more of a kick than the standard sort, but if I had done my research, I would have discovered the kick in question actually came courtesy of a sauce derived from Carolina Reaper, a pepper that usually clocks in at around 1.5 million units on the Scoville scale and currently holds the Guinness World Record for being the hottest in the world.

As a result, I was caught very off-guard after being greeted by a noticeable but pleasant heat and made the fatal error of thinking “Oh, these aren’t even that hot” around a second before the Reaper’s burn arrived in full force and proceeded to absolutely obliterate my palate for a solid couple of minutes.
I’ve built up a pretty solid tolerance for spiciness over the years, and again, I have no one to blame but myself for not adequately preparing myself for the beating my taste buds took. Of the four sauces I tried, this will easily be the most divisive, but if you’re a particularly heat-seeking eater, this will check all of your boxes. 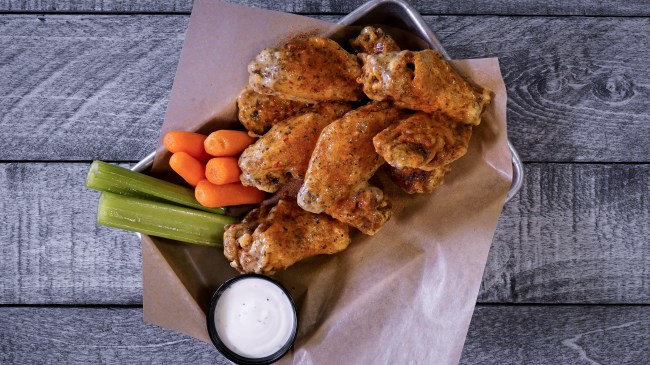 It’s hard to beat the classic combination of pizza and wings to stay fueled during a grueling afternoon of watching football without leaving your couch but *voiceover guy for a sports documentary voice*  what if I told you…there’s a way to eat pizza and wings…at the same time? Well, that’s exactly what you can do courtesy of this sauce, which seemed like a very bold strategy I was fairly skeptical was going to pay off.

After busting them open, I was immediately greeted by the smell of the parmesan and garlic that serve as the foundation of the sauce, which is complemented by tomato and basil seasoning. However, it works extremely well, as all of the elements combine perfectly to create a formidable and fantastically balanced coating that easily surpassed the expectations I had for it. Its fairly untraditional nature did take a little bit of getting used to at first, but once I managed to adjust my mindset a bit after a few bites, I found it hard to stop myself from going back for more. 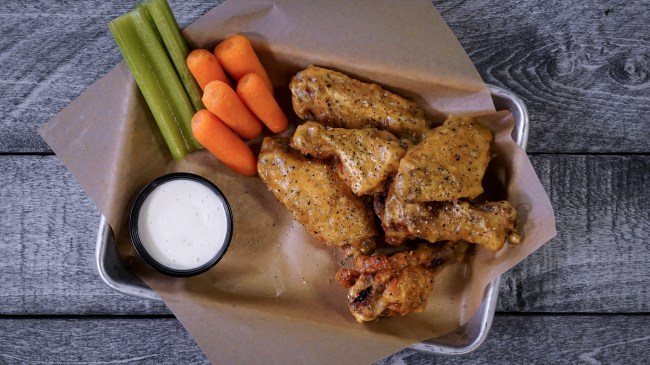 If you’re a Buffalo Wild Wings connoisseur, you know that a lemon pepper dry rub has been a staple on the menu for a while. However, if you’re familiar with the cult of the flavor inextricably linked to Atlanta, then you’re likely aware of the hallowed style known as “lemon pepper wet.”

Countless rappers representing the ATL have sung the praises of the legendary sauce over the years and it recently found itself in the news after an NBA player found himself treated to a 10-day quarantine in the bubble after he failed to resist the urge to pick some up while in the city. I’ve never had the chance to visit any of the joints competing for supremacy in the Lemon Pepper Capital of the World but I have trouble resisting the urge to order it at any restaurant that features it on the menu so I was very curious to see how this one measures up to the others I’ve tried.

The answer? Very, very well. The bright lemon flavor that initially greets you eventually gives way to the spice provided by an ideal amount of pepper, and even though I was fairly stuffed before capping off the taste test with these, they managed to provide me with a sort of second wind thanks to a sheer deliciousness that caused me to devour all of them much quicker than I intended to. While I give all of the new sauces my seal of approval, this one managed to earn my most ringing endorsement.

While the quartet featured above will likely be the primary draw for most of the people reading this, I should note they’re not the only newcomers to the Buffalo Wild Wings lineup, as it also recently debuted the Buffalo Wedge Salad. The entree features a massive chicken tender covered in the sauce that lends its name to the dish in addition to bacon, a one-two punch of bleu cheese dressing and crumbles, and these things called “vegetables” (specifically lettuce, tomato, and green onions), which provided me with the chance to tell myself I’m being healthy. 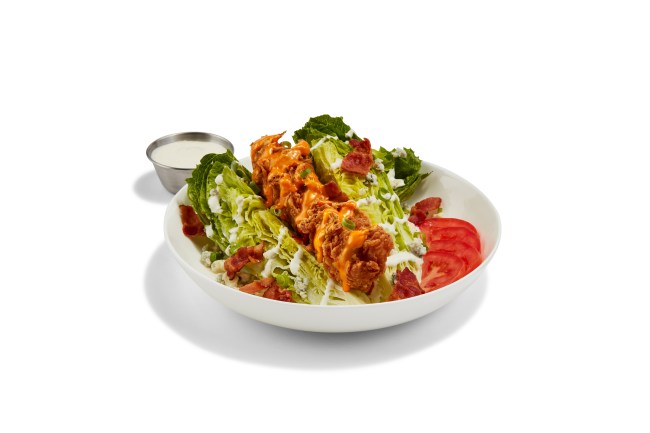 On the off chance you don’t trust my incredibly authoritative opinion concerning the above items, feel free to try them for yourself by hitting up your nearest Buffalo Wild Wings and yell at me on Twitter if you disagree.