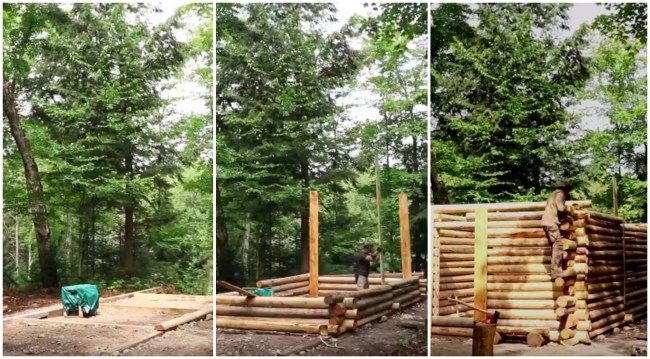 Get ready for today’s moment of zen. This dude filmed himself building a log cabin in the woods from scratch out in the Canadian wilderness. The time-lapse video shows the project going from a clearing in the woods to a full-blown log cabin that will stay standing for years.

I set this video to ‘mute’ and changed the settings so it played at 2x speed while watching and I’d recommend doing the same. The music doesn’t really add anything to this video and watching the log cabin pop up at 2x speed is pretty badass:

Here’s some of the description from the YouTube video:

Timelapse video of a complete log cabin build by one man alone in the wilderness of Canada, from 1st tree I cut to last floor board I laid. If you want to build a rustic log cabin or tiny off grid home alone in the wilderness and you haven’t seen the rest of my videos, this is a good primer. It’s super fast motion though, so if you are interested in building a primitive log cabin like this, take a look at the “Log Cabin The Bear Den” playlist on the channel.
At the beginning of the video, I show a winter drone photo of the cabin in the snow in December. Then I flashback to the first balsam fir tree I cut down with a saw and axe near the cabin. I drag the trees into place and clear the cabin site. All summer, I cut the notches in the logs as I built the cabin up, offsite. Once I was finished notching the logs with a log scribe, saw, axe, adze and wood carving gouge, I loaded up the entire cabin of logs and moved them to my land near Algonquin Park, Ontario Canada.
Once on site, I spent a month reassembling the cabin on a foundation of sand and gravel. Once the log walls were up, I again used hand tools to shape every log, board and timber to erect the gable ends, the wood roof, the porch, the outhouse and a seemingly endless number of woodworking projects.
For the roof, I used an ancient primitive technology to waterproof and preserve the wood – shou sugi ban, a fire hardening wood preservation technique unique to Japan and other areas in northern climates. (via)

This dude actually has a bunch of incredibly fascinating videos over on his YouTube channel. So you should definitely click here to peruse his other videos if you were into this one.

Building a multi-room log cabin in the woods from scratch has always been a dream project of mine. I’d love to be able to spend 3 or 4 years doing it. Mapping out the steps in the Winter and rushing to build from late Spring through early Fall before the snow starts. Using the months when I can’t build to get prepped. I have an elderly relative who did this in his late 20’s and built a three-story house in upstate New York and he described as the most fulfilling project of his life.