Want A Totally Not Depressing Free Whopper At Burger King On Valentine’s Day? Just Bring A Picture Of Your Ex To One Of These Locations 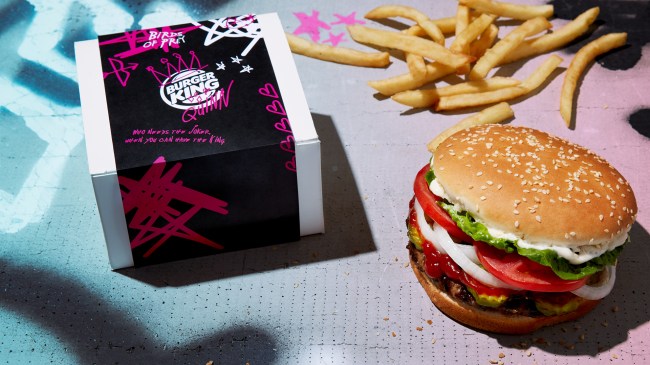 I’ve been seeing a lot of hype online lately about the push to get rid of all the sappy love bullshit on Valentine’s Day and make February 14th a Winter/Spring Halloween. I’m on board with this proposal. I’m not a Math major but two Halloweens is 222% better than one Halloween. These are the facts.

I’ve already put in an order for a dozen jumbo Maryland blue crabs to be overnight shipped and that’s about the extent of what I plan on doing for Valentine’s Day this year. But for anyone out there looking to score some free food they can scoot on down to Burger King at in NYC, Boston, San Francisco, or Los Angeles.

At these participating Burger King locations (addresses listed below), people can bring in a picture of their ex’s and score a free Whopper that’s part of a “Breakup Box”. This is somehow part of a partnership with Warner Bros. Pictures to promote their new Birds of Prey film starring Margot Robbie as Harley Quinn.

The press release gives a rundown of the Valentine’s Day promo involving pictures of people’s ex’s:

On February 14, scorned lovers in New York City, Los Angeles, San Francisco and Boston can bring a printed photo of their ex to Birds of Prey-themed “breakup boxes” at select Burger King restaurants, to be exchanged for a Whopper*. Guests in New York City can also bring in letters, stuffed animals or a specified piece of clothing to claim their reward.

And, because it’s Harley Quinn, the mayhem doesn’t stop there. Starting February 6, she is taking over an entire select Burger King restaurant in New York City, proclaiming it officially “Burger Quinn.” From the store-front windows and marque, to the ordering queue and even the bathroom mirrors, Harley’s havoc can’t be missed with her signature graffiti and irreverent style. She’s even managed to pull together her very own limited-edition, hot pink #BurgerQuinn crown.

For those who don’t live near a “breakup box,” Burger King is also launching an in-app quiz, giving participants a chance to get a $3 Whopper only via the BK® app. The quiz will feature five questions, and in order to be eligible for a Whopper guests must answer four out of five correctly.

I kind of love how they sneak The Whopper ingredients in there at the bottom as if half of the world’s population doesn’t know what the hell a Whopper is. I haven’t had one in years but could easily name off those ingredients without blinking.

These are the four Burger King locations that are participating:

As stated above, anyone who doesn’t live near any of these locations can pop on Burger King’s app and take a quiz. Yes, they have an app. Of course, they do. And participants can score $3 Whoppers by taking that quiz and answering the questions appropriately.