‘I Shattered His Windshield With My Head!’: Busta Rhymes Trashed Wyclef Jean’s Tour Bus After Hearing Eminem For First Time 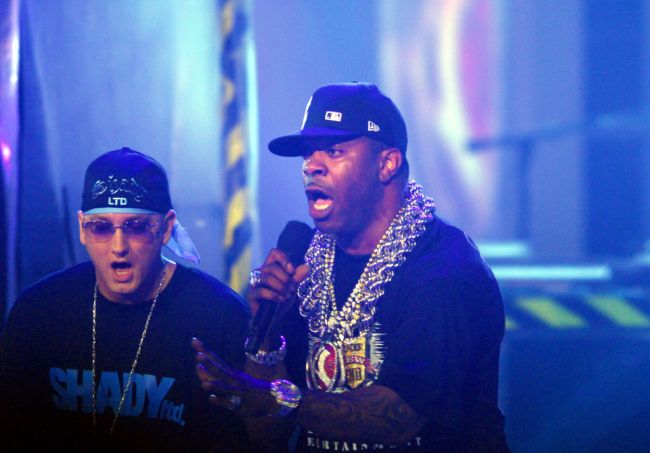 Wyclef told Hip Hop Is Real that Busta Rhymes owes him money for wrecking his tour bus after the Break Ya Neck rapper heard Eminem’s first hit song My Name Is before it was released on January 25, 1999.

Jimmy Iovine – who co-founded Interscope Records and signed Tupac Shakur – gave Wyclef a cassette tape of My Name Is by Marshall Mathers, who was hardly known at the time. Wyclef played Slim Shady’s breakout hip-hop hit to Busta who had a violent reaction.

Wyclef exclaims, “Busta Rhymes will tell you, when he came on my tour bus, he literally broke my tour bus!”

“He trashed my tour bus,” Wyclef says, before telling Busta, “You know Bus, you still owe me for my tour bus!”

“But you know Busta’s a giant,” Wyclef adds. “Like, what are you going to tell him? He can literally take you apart with one hand!”

“Yeah, he went crazy,” Wyclef notes. “Until today, I have nightmares of this thing. I mean Busta trashed my beautiful tour bus after listening to this Eminem song.”

“Wyclef Jean was the first person to play My Name Is to me – before it was even out,” Bus-a-Bus recalls. “We were on tour together, and he had a six-song EP from Eminem.”

“When he played My Name Is, I could not believe it,” he said. “I went so crazy on his bus that I shattered his windshield with my head!”

“I couldn’t believe the sh-t that Em was saying, and Dre’s production was unbelievable – at the time, nothing existed like it in the whole game,” the Touch It rapper said.

Eminem would go on to win the Best Rap Solo Performance at the 2000 Grammys for My Name Is – beating out Busta’s Gimme Some More.

“Em is one of my favorite MCs ever,” Busta told NME. “We’ve done multiple records together and even on his latest album, Music to Be Murdered By, the track Yah Yah used my vocals from Woo Hah!! Got You All In Check. He’s one incredible motherf-cker!”

Busta Rhymes collaborated together on several rap songs: I’ll Hurt You, Touch It Remix, and most recently Calm Down on the Busta’s 2020 “reloaded” Extinction Level Event 2: The Wrath of God album. The ELE2: Reloaded version of the album featured the previously-released 2014 single Calm Down with Eminem.