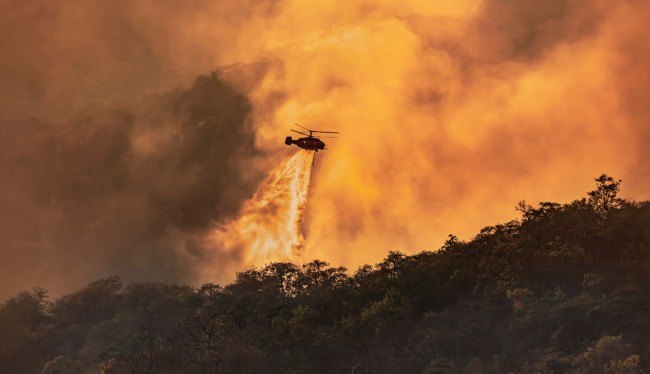 Half the state is on fire while also sweltering through a historic, record-breaking heat wave. On Sunday, the Woodland Hills neighborhood of Los Angeles reported the highest temperature in the city’s history: 122 degrees.

Meanwhile, fires are ravaging the state once again, including the Creek Fire in Central California, which scorched over 45,000 acres and left hundreds stranded right in the middle of the flames. Over 200 people were rescued from military helicopters when flames engulfed all the roads to safely exit Mammoth Pool Reservoir in Sierra National Forest.

The footage of this particular fire is terrifying:

“There’s fire on all sides, all around us.” Absolutely terrifying video from Mammoth Pools where 200+ people were trapped when the Creek Fire exploded pic.twitter.com/xDb8huwWKe

A backpacking trip cut short by unforeseen thunder, ash rain, and having to drive through literal fire to evacuate #SierraNationalForest in time. Grateful to the SNF ranger who led us down… wish we we got her name. #CreekFire @mercnews @sfchronicle @ABC7 @KTVU pic.twitter.com/37Ys7XGJ2a

Meanwhile, in San Bernardino County, one fire in particular is being blamed on a true scourge of modern society: A gender reveal party.

According to CAL FIRE on social media, the El Dorado Fire – now burning over 7,000 acres as of this writing – was caused by a “smoke generating pyrotechnic device” on Saturday.

CAL FIRE Law Enforcement has determined the El Dorado Fire, burning near Oak Glen in San Bernardino County, was caused by a smoke generating pyrotechnic device, used during a gender reveal party. The fire began at 10:23 am on September 5, 2020 in the El Dorado Ranch Park in Yucaipa. The fire spread from the park to the north on to Yucaipa Ridge that separates Mountain Home Village and Forest Falls from the City of Yucaipa.

Bravo to CAL FIRE for emphasizing that last line in the press release, that parties who cause said fires can be held criminally and financially liable for their own idiocy.

Imagine your gender reveal party smoke bombs causing a *literal* blaze of destruction? I can’t fathom it, we live in the stupidest of times.

Let’s put that in perspective with some video from the authorities.

A gender reveal party caused THIS. California newspapers report over 3,000 residences were affected by the fire as of Saturday evening. It’s only 5% contained, being fought by 527 firefighters and other personnel.

Incredibly, this isn’t the first time a gender reveal has caused a multi-million dollar wildfire. In 2017, an Arizona man named Dennis Dickey started a forest fire by shooting at a gender reveal target filled with Tannerite, which is highly explosive. The explosion ignited a wildfire that torched 47,000 acres because of 40 mph winds and dry conditions. This became known as the Sawmill Fire near Tucson, Arizona. The damage brought forth from law enforcement was estimated to be more than $8 million, with Dickey agreeing to pay $100,000 for damage upfront, along with $500 a month for the next 20 years.

Can’t get any stupider than potentially burning down all your neighbors houses and risking the lives of hundreds, including first responders, for TikTok and Instagram content. It’s another example of how selfish special pony syndrome and social media brain syndrome continues to disease our society.

Me at my gender reveal. pic.twitter.com/7uyC9D5oM9

We better get some footage of the gender reveal considering the havoc its wrecked. Considering the multi-million price tag, it better be LIT (figuratively) before being LIT (literally).

Has there ever been a better reason to end gender reveals?