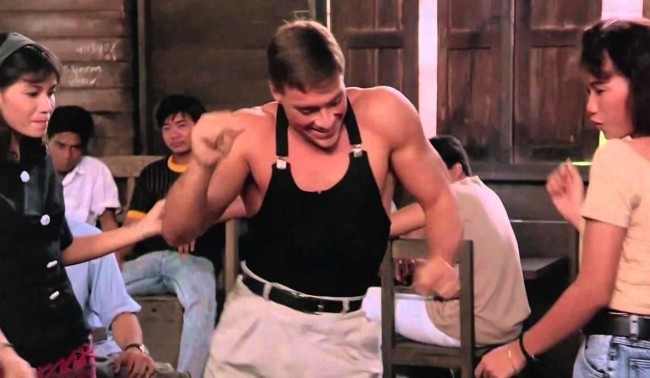 In the year 1989 the world was introduced to the never-ending story of Kurt Sloane, the younger brother of Eric Sloane, the United States kickboxing world champion, portrayed by Belgian action star and martial artist Jean-Claude Van Damme in the movie Kickboxer.

When Kurt travels with Eric to Bangkok so he can fight Thailand’s top fighter Tong Po, Eric gets his ass beat to a pulp and ends up being paralyzed from the waist down.

Naturally, Kurt being a good brother, he vows to avenge Eric, but not before sticking around to learn the art of Muay Thai and attempting to put a stop to a criminal organization that’s harassing his new trainer’s niece, which leads to him taking a severe beating before finally defeating Po and avenging his brother.

That’s the short version of it. The only thing I left out was perhaps the most pivotal scene in the film Kickboxer – the dance fight.

Thankfully, comedy writer Mike Camerlengo is here to (hilariously) lead us step-by-step through one of the most hilarious segments in movie history with his latest installment of 60 Second Classics.

Warning: do not attempt to drink anything while watching this because if you do you’ll end up with your beverage all over whatever device you are viewing this on.

I broke down the dance fight from the movie Kickboxer pic.twitter.com/pWyOVMsUpu