Can Workers Still Get Fired For Using Marijuana In Legal States? 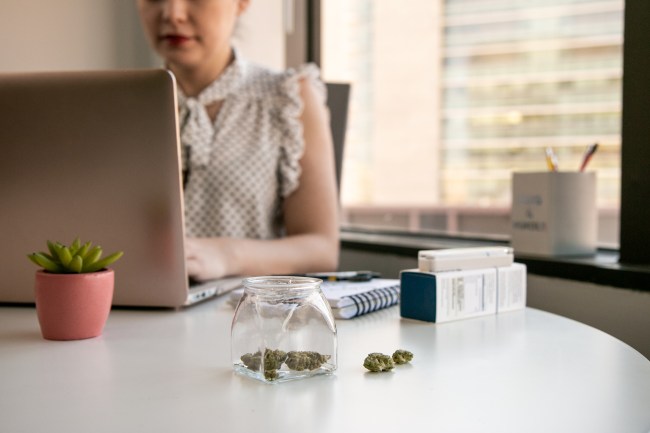 The legalization of marijuana across the United States has created some illusions that can get the average citizen into trouble. The big one is that just because weed is now legal in 11 states, the entire system has changed, and now smoking a little weed really isn’t considered much worse than drinking beer. But that’s not exactly the case. Although it is true that we’ve entered a brave new world with all of this cannabis legalization business, the reality is there is still all sorts of trouble a person can get themselves into by frequenting this scene. This is especially true for the working class schlubs. Because while weed might be legal in your neck of the woods, it could still jam you up with your employer. In fact, without a little caution, unsuspecting stoners could find themselves in the unemployment line, homeless and perhaps even holding up a “Will Work for Weed” sign in front of their favorite dispensary. Consider yourselves warned. Legal marijuana doesn’t mean shit when it comes to the rules of the workplace.

Depending on the type of job a person has, it really isn’t wise to relish in all of the good times that come from pot being legal. That’s because there really is no such thing as “legal cannabis” here in the Land of the Free. No sir, the federal government still considers the herb a Schedule I, outlaw substance, ranking it up there in the danger zone with the real heavy hitters of the drug culture, such as heroin. States have been given the freedom to change the pot laws, which has allowed them to experiment with a taxed and regulated pot market that follows the path of our old friend the alcohol trade. But at any moment, the Feds could decide that stoned Americans are causing an uprising in pedophilia or some other nonsense and then swoop in and raise nine kinds of hell. Not that they would, but it is still possible. And because of this, a lot of employers are distancing themselves from marijuana. They believe as long as it remains illegal in the eyes of Uncle Sam, they aren’t going to change their drug policies and allow workers to get stoned.

Some of these businesses are even bound by a drug-free workplace law established by the federal government. It was put on the books during the Reagan Administration requiring certain employers to test for marijuana as a prerequisite to employment. This policy calls for organizations with a federal contract of over $100,000 to inform workers “that the unlawful manufacture, distribution, dispensation, possession or use of a controlled substance is prohibited in the covered workplace.” It also allows companies to take action “against employees who violate the policy.” The law, however, does not hold any weight with private companies.

Therefore, if a person works in fast food or in the hospitality business, chances are their affinity for weed is never going to have any bearing on their ability to collect a paycheck. A study published last year in the journal Drug and Alcohol Dependence found that service industry personnel, construction workers, entertainers, salespeople and maintenance crews were the top five professions where workers are higher than an old Mountain Goat while on the job. This is because very few of these positions require a person to pass a piss test to get hired, nor do the HR departments require these folks to pass random drug screens for continued employment. Still, employers in all legal states have the right to shit can any worker who shows up to the job blasted out of their gourd. That’s even the case for the guy washing dishes at Applebee’s. Some companies can also refuse to hire somebody if they can’t pass a pre-employment drug test. At this point, only Nevada and New York City prevent employers from engaging in this practice.

“The right to use marijuana legally under state law does not necessarily guarantee job protection for exercising that right,” reads a blog post on Lawyers.com. “Unless your state’s marijuana law specifically prohibits your employer from firing you for off duty marijuana use, you probably won’t be protected. So far, several states grant employees such protection, but typically only for medical marijuana use.”

The good news is that more companies are starting to amend their drug policies to fall in line with legal marijuana states. A lot of them are worried about getting slapped with a lawsuit for discrimination to worry too much about weed. So, typically, as long as an employer doesn’t make random drug testing a condition of employment, workers who get high after hours are safe from getting canned. What they do on their own time is their business, which is the attitude that a lot of companies are starting to embrace. That is, as long as an employee is not suspected of being under the influence on the clock and does not get into an accident. It is important to understand, however, that anyone trying to collect some of that workers’ comp money following an accident, regardless of the drug testing policies of their employer, is almost always going to have to prove that they were not wrecked at the time they were injured. Most states, even where marijuana is legal, still require drug testing for all worker’s compensation claims.

One last thing to consider is that because of how marijuana metabolizes in the body, a drug test can still show that someone is under the influence of THC even if they are not impaired at the time. This means if a person smokes weed over the weekend and gets hit with a random drug test on Monday, they could still find themselves fighting for their job. The rub is that it is still possible for an employee to get terminated for marijuana use, even in legal states. So, always have a clear understanding of the drug policies instituted by your place of employment. Otherwise, you could find yourself living on bologna, bunny bread and bong resin. And let’s face it, that’s no kind of life.