This Just In: Potheads Are Better Poopers Than The Rest Of America 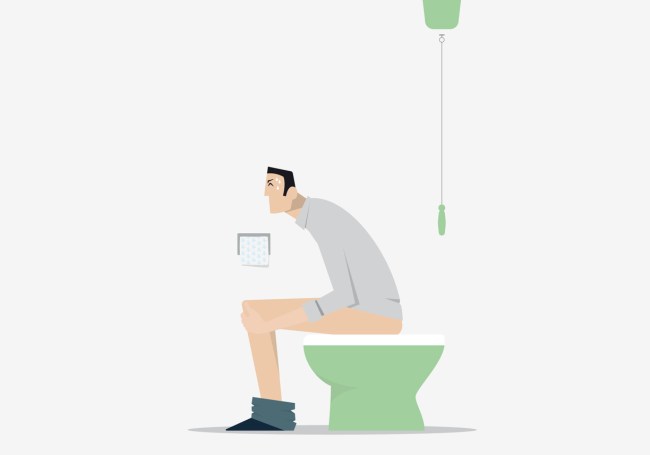 And just like that, your stomach is bloated and your intestines are all twisted up in knots. There is no doubt about it, my friend, you are constipated. But where in hell’s merciful fuck did you go wrong? Might it have been the entire large pizza with extra cheese that you consumed the other night on top of 16 beers and an order of queso dip? Or do you think it’s because you’ve been living on a fast food diet for the past decade, getting absolutely no exercise and only drinking water to help stave off the worst of a vicious hangover? If this sounds like you, well, join the club.

Somewhere around 10 million Americans are all blocked up in the guts for various reasons, including a piss-poor diet, metabolic and neurological disorders, depression, and a savage list of other factors of the clog. This means that a significant chunk of the population simply cannot take a dump in the manner in which the porcelain gods of the universe intended for it to happen. Some poor souls are out there risking an aneurysm with their pants around their ankles trying to make a doo-doo, and that’s just not right — we don’t care who you are. However, the solution may be as simple as just getting stoned and waiting for the belly rumble to come.

It seems that our old pal marijuana could be just what the doctor ordered when it comes to helping America take a shit again. A recent study published in the American Journal of Gastroenterology finds that those folks who smoke a little dope are less likely to sweat it out on the crapper than those who do not. That’s right, potheads are better poopers, the study finds, which if you stop and think about it makes perfect sense. Because it is the weed that brings on the munchies, making us want to devour all of the junk food that gets us jammed up in the first place. If there is any compassion at all on this whirling planet, the cannabis plant should offer us some relief.

So, if you are reading this article in the office crapper while trying to give birth to some kind of monster that your ravenous ways helped create over the weekend, perhaps it’s time to shut er’ down for a few and catch a buzz before continuing to grunt, push and wiggle your way into a heart attack. The cannabinoid combination of THC and CBD might be enough to relax those bowels and get the remnants of your dietary atrocity rolling freely down the Hershey highway once again.

We use the word “might,” however, because scientists really don’t have any idea how marijuana works in eliminating those gnarly log jams that most men will experience at some point in their lives. They have simply come to this conclusion by examining some five years’ worth of drug use surveys and something known as the Bristol stool chart. From what we can tell, this chart is just a pictorial showing the seven kinds of shits that can emerge from the bowels of humanity.

What researchers found was that people who recently consumed marijuana were 30 percent less likely to end up constipated. In some cases, they even found that people who smoked pot on occasion were taking better craps than those who had never used marijuana at all. “Our analysis is the first population-based human clinical study of marijuana and bowel function providing important insights into the aggregate effects of the various components of the marijuana plant on constipation,” the study’s authors wrote. “Owing to the high prevalence and burden of constipation in combination with the increasing availability of both recreational and medicinal cannabis, further studies are needed to identify how use of whole cannabis, different marijuana strains, and frequency of marijuana use exert their apparent effects on constipation.”

It should be pointed out that the science behind cannabis and constipation comes with conflicting results. While this particular study shows a direct link between getting high and taking healthy dumps, other research indicates that it might actually worsen the condition. Some studies show that cannabis edibles, tinctures and pills are more likely to cause constipation than raw marijuana flower. Therefore, if you happen to be one of those unfortunate bastards who gets plugged up the higher he gets, perhaps smoking is still the best route to go. And we suppose from where you are sitting, lighting a match wouldn’t be a bad idea anyway.