What To Expect From Federal Marijuana Legalization In 2020 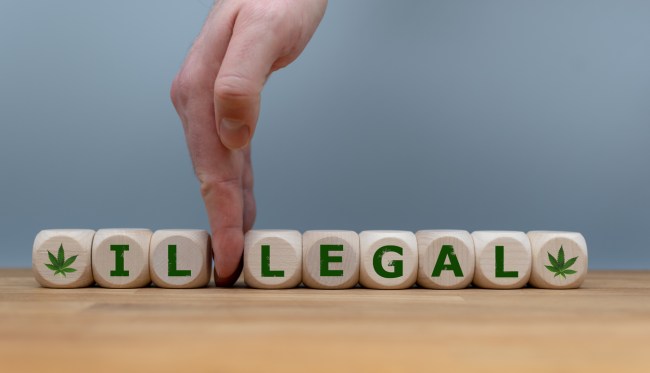 It’s all getting a little bit too goddamned much to stomach, all of this ultra-positive, do-gooder, we’re making substantial progress in the realm of nationwide marijuana legalization horse shit that the cannabis advocacy community keeps feeding a pop-culture sucking public. It’s been making me dry heave for months, let me tell you. These toking turd gurglers, fully aware that cannabis hopefuls all across the nation will believe just about anything (and I do mean anything) that they read in the media, came out recently to proclaim that 2019 was the best year in the history of cannabis reform. But what they failed to tell a clickbait fiending America is that, sure, there was a hell of a lot more noise surrounding legal weed in the year of the pig, but nothing that important really took place. Hell no, all that transpired, really, was that Illinois legalized the leaf for adults 21 and over, and U.S. House Democrats approved a couple of pot-related bills that got squashed as soon as they were sent over to the real swinging sacks of Congress. That’s about it. That’s the summation of the cannabis shit show and dumbass circus that advocates are so proud of. They want you to believe that all of their hard work is finally paying off and that the hippie dreams of legal weed are being realized by the fucks who once held it down. It is my opinion, however, that these clowns will tell you anything to avoid getting a real job.

So, in the spirit of sticking a sharp stick into the neck of undeserved optimism, I have decided to make this column all about what can be expected from marijuana legalization in the new roaring 20s. Now, these are not my predictions, mind you, as I do not have a smoke-filled crystal ball with all of the answers. But I feel like the following is an accurate tale of the tape as seen from last year’s madness on Capitol Hill. Because, after all, we are still dealing with the same Republican-dominated sandbaggers of the stoner culture that has been keeping the movement flat for the past several years. And unless something drastic happened to these douche bags over the holidays, chances are they still hate weed. Like it or not, agree or disagree, fight me or fuck off, this is how the new year is going to shake out for federal marijuana legalization.

There will inevitably be one or two pieces of pot-related legislation ushered in by the Democrats in the House of Representatives. Ever since the donkey-eared suits claimed control of the lower chamber at the beginning of last year, they have been hell-bent on becoming the official pot party of American politics. In 2019, they made a move with the SAFE Act, which was designed to give banks the freedom to do business with the cannabis trade. Then came the MORE Act, a bill that would have legalized weed at the federal level and allotted some “we’re sorry” funds to be distributed to those communities most ravaged by the drug war. Both bills found success in the House, but were slaughtered to death on the steps of the Capitol building by Senate Majority Leader Mitch McConnell and his band of goons. They didn’t even consider them.

It is possible and highly likely that those two bills (or ones like them) will be reintroduced in the House in 2020. And sure as shit, the cannabis advocacy community will stand up with slobber all over their chins, announcing that there is a good chance that prohibition is on its death bed. But while there will be a lot of humping and grunting, pot-loving America will not be satisfied. No, the Democrats will approve the bills without issue, just like they did last year, but they will never see the light of day. Why? Because Senator McConnell, the gatekeeper of all things in the Senate, who just so happens to like Roger Ebert’s dickhead brother, just isn’t ready to legalize marijuana. He has preached this shit time and again. Yet, pot hopefuls still have their fingers crossed that he is going to have a change of heart because they think he gives a damn about lost tax revenue. That’s simply not going to happen this year. In fact, every time you see in the news that federal lawmakers are discussing marijuana legalization in 2020, just know all that really means is the Democratic-controlled House is entertaining some legislation. McConnell and his Senate slobs won’t have anything to do with it. Even if McConnell were to get a wild hair up his ass and make the decision to side with this issue, it wouldn’t be anything drafted by the Democrats. No sir, he’s not about to do anything to further their agenda, not in an election year. Which brings me to the best chance we have for marijuana legalization in the United States.

Depending on the outcome of the 2020 election, the nation could be in good shape to legalize weed in 2021. There are several Senate seats up for grabs this year, including McConnell’s, which means the Democrats could take control of both the House and Senate. There is also a possibility that President Trump will get booted out of the White House and a Democrat could take charge of the country. All of those candidates, except for Joe Biden, support ending prohibition. Yet, with the impeachment insanity, not to mention the latest war cry with Iran, there is a decent shot that Trump could secure a second term. Then, even if the Democrats win both chambers, marijuana legalization may still be royally fucked. Trump isn’t about to help the opposing party make historic strides in Congress. Especially not after they have done everything but drag him out on the White House lawn and beat his balls black and blue with a rubber hose. Not a fucking chance. So, in the calm of a perfect storm, we could see a situation where weed is going legal nationwide next year. But just as easily, that shit could suffer a setback that puts the possibility of legal marijuana closer to 2025 or beyond. Therefore, if legal weed is something that you just cannot live without, my suggestion is to vote Democrat when it comes time to hit the polls in November.