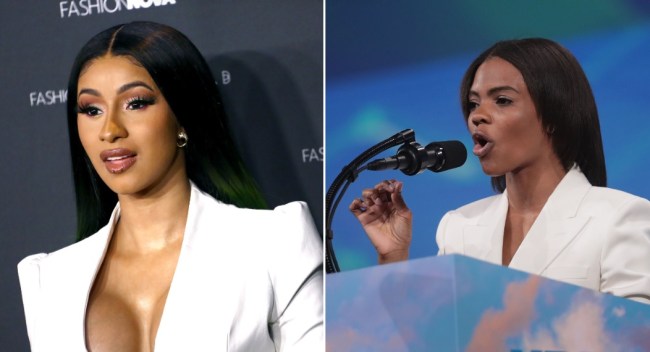 Candance Owens and Cardi B are currently duking it out over on Twitter and things are getting real ugly.

On Monday night, Owens appeared on Tucker Carlson’s show on Fox News and bashed Cardi over her WAP performance at the Grammys

Candace Owens says WAP being performed at the Grammy's signifies the "corrosion" and "end of an empire" pic.twitter.com/G1BpwUdTTH

“I agree with you 100 percent in the assessment that this feels more sinister. This is starting to me to seem like it’s not even left or right, it’s not a political issue. This seems like an attack on American values, American traditions, and you’re actually actively trying to make children aspire to things that are grotesque,: “We are celebrating perversity in America.”

Cardi saw Candace’s appearance on Fox News and thanked her for giving her free publicity.

Just @ me next time, directly.

You are a cancer cell to culture. Young black girls are having their minds poisoned by what you are trying to package and sell to them as “empowerment”.

I’m one of the few that has courage to tell you the truth.

You should thank me. https://t.co/qvYriScfWm

Matter fact I’m just going to thank Candy. She put my performance on Fox News giving it more views that boosted the views on YouTube and is counting towards my streams and sales 😜 STREAM UP AND WAP .REMEMBER GROWN PARENTS ONLY YOU CAN MONITOR WHAT YOUR KIDS WATCH NO1 ELSE.

Cardi and Candace then began arguing about why it was okay for Melania Trump to not being questioned about her nudes but Cardi is criticized for dancing.

I’m obsessed she’s my idol 😍 She showed me I can be naked perform wap and still be a First Lady one day ! ….wait so only White women can be naked and show their sexuality and evolve in their 30s but I can’t ? Wow America is soo unfair .To think this was the land of the free. https://t.co/f36x5a7H3H

Then the two started taking jabs at each other’s marriage.

And black women should be more like you? 🤨After all the fighting for equality and freedom they should be submissive to a white a man after years of abuse & rape making them a sandwich while pregnant cause in your words “ that’s what a woman should do”? Interesting https://t.co/4BxuhbA3iw pic.twitter.com/ZiAoV8p4Oz

Making my husband a sandwich is not submissive.
Cooking for your family is not submissive.
Yes, a good woman should take care of her family. And yes, a good man does the same.
My relationship is healthy. You can’t say the same so maybe take some notes. https://t.co/so86avZJtJ

If you think making your husband a sandwich is a sin, but popping your vagina into another woman’s vagina in front of the world is power— you are a lost soul.

Cardi B then shared a tweet in which Owens supposedly said her husband cheated on her with her boyfriend. Candace claims the tweet is photoshopped and is threatening to sue Cardi B for slander.

Not you talking about two women thrusting their vaginas together while your husband and brother slap cocks and balls together .WELL WOULD YOU LOOK AT THAT !wow https://t.co/SvbnEXOOQF pic.twitter.com/kzzS6nVww9

I am literally laughing out loud.
Cardi. My dear.
That is clearly a photoshopped tweet.
😂😂😂😂

Only one of us has a husband that sleeps around. https://t.co/Mq7gbUFSDj

What the actual hell are you talking about?
Are you dead serious right now trying to substantiate a photoshopped tweet?
Asking one more time before I get the lawyers to make you publicly admit you’re lying and embarrass yourself. https://t.co/aiBOghhcv6

FYI I DO have a brother, a private citizen, who you are slandering right now with this photoshopped image that you are now publicly claiming you saw tweeted in real life.
You want to admit you lied now, or get sued so I can expose you as a liar?
I win either way. https://t.co/aiBOghhcv6

This looks like a random blog that seems to have been dumb enough to have fallen for a photoshopped tweet.
You tweeted that the photoshopped tweet was real and you saw it on a day that I was trending—which is a lie.
You made that part up to help circulate a slanderous lie. https://t.co/fjqOx3NmOS

Yes. Just spoke with my family. I am 100% suing Cardi for that nonsense. You can’t just start throwing out wild lies against private members of my family because you’re upset someone called your out on your degenerate performance.
I‘ll keep you all posted. https://t.co/v2aisvQiOG

I’m going to sue candy for claiming I photoshopped a tweet that dozens of articles reported about back in November 2016z.First she claim me and my team photoshopped it now it was a fake tweet.Which one is it .Everyone is free to Google . https://t.co/XlIbC4fA7Y pic.twitter.com/YeAlgywlrF

Of course your family going to tell you to sue since you tweeted your brother and husband beat box on dicks .It’s everywhere you can even Google it .Even random people dates they saw you tweet and delete .I DIDNT MADE IT UP. https://t.co/1p4HBI5TyZ pic.twitter.com/iWnHcABgmo