Critics Reveal Their First Reactions To The ‘Captain Marvel’ Movie And Phew, They’re Not Terrible 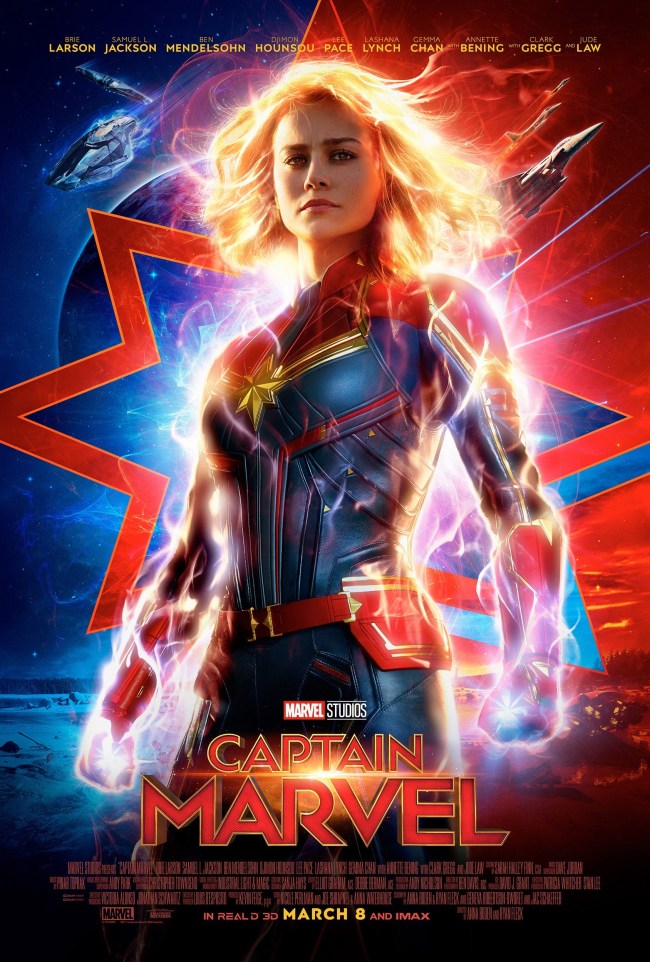 The first reactions from critics who got an early peek at Marvel’s upcoming Captain Marvel movie starring Brie Larson are in and if you happen to be a cat person then have we got the film for you!

In case you just woke up from a coma, Captain Marvel will be the first film in the Marvel Cinematic Universe that is directly related to Avengers: Infinity War (even if it is just because her logo showed up in the end credits scene, and Ant-Man and the Wasp really didn’t have anything to do with it).

Set in 1995, Captain Marvel follows Carol Danvers, a former U.S. Air Force fighter pilot, as she turns into one of the galaxy’s mightiest heroes and joins Starforce, an elite Kree military team, before returning home with questions about her past and identity when Earth is caught in the center of a galactic conflict between two alien worlds.

Last night, the social media embargo was lifted so now we get to find out what people thought of the film. Here’s what some of them had to say.

#CaptainMarvel is a great origin story. Brie’s buddy cop chemistry with @SamuelLJackson is so much fun and her relationship with Lashana Lynch is the real heart of it. Ben Mendelsohn and the cat both steal the show.

Its very different than most of the MCU films and so very 90s. It's funny and fun and super empowering. It made me feel proud to be a woman.

#CaptainMarvel is (takes deep 90s breath) TOTALLY AWESOME. Never related to a Marvel character quite like Carol. She’s the stubborn witty 90s kid I like to think I am. pic.twitter.com/H6Q9s90KHA

#CaptainMarvel was a lot of fun! Just enough ‘90s nostalgia without overdoing it. Brie Larson is great. Ditto Sam Jackson & Ben Mendelsohn. Goose the cat is purr-fect. Some nice surprises and clever decisions throughout. Cool sci-fi elements. And funny! Thumbs up! pic.twitter.com/PzzxXir8pZ

#CaptainMarvel is pure joy. I cannot wait for the generation of little girls who will grow up with Carol Danvers as a hero.

Love the cat, love Sam Jackson, LOVE Ben Mendelsohn, but honestly I’m calling Lashana Lynch as MVP. She brings an emotional weight to the film that is needed and transforms the entire movie upon arrival. Definitely need to see more of her#CaptainMarvel pic.twitter.com/QeEzUBM8O1

Lots of fun Easter eggs in #CaptainMarvel that link it to the history and other films in the MCU. Watch closely.

Captain Marvel is a blast! Has some cool surprises that I definitely didn't see coming, and the mystery/origin it weaves is engaging and fun. Brie Larson is awesome, and makes a fantastic first step into the MCU #CaptainMarvel pic.twitter.com/oqrRtgDQrp

The future of the MCU gets even brighter adding #CaptainMarvel to the mix. Really fell for @brielarson’s sass, strength & energy in the role. Same with @LashanaLynch too! Ben Mendelsohn is A+ casting as Talos. And yes, Goose is a scene stealer. 2nd viewing can’t come soon enough.

#CaptainMarvel is a welcome addition to the #MCU. The movie is really well done with some great moments. #benmendelsohn steals almost every scene he's in. @brielarson literally shines in the role. So ready for #AvengersEndGame pic.twitter.com/GET0socRjl

THE GOOD, NOT GREAT

1. Cat people will love this movie.
2. Several truly magnificent music moments for this 90s kid.
3. Carol's hero moment was very cathartic/true to the female experience, imho.
4. The MCU feels more complete now that Carol is in it. ♥️

#CaptainMarvel doesn't break the MCU mold, but it's a different and weirder spin on the origin story narrative, and that's a good thing. Part buddy comedy, part cosmic adventure, part "oh, yes, Ben Mendelsohn IS good in everything" reminder, it's also full of actual surprises.

Comic and MCU fans will like #CaptainMarvel more than the average moviegoer. Still, that audience will like it a lot, it’s totally an origin story. https://t.co/dcgUNVYudn

The movie feels very much like the introduction to a new character meant to be centered in a new phase of the franchise, which works both for and against the story at times. The key to enjoying it is just liking Carol (easy) and letting the previous Marvel phases go (less easy.)

And not wacky weird like the GOTG movies. Think more “Rey snapping into endless mirrors” from The Last Jedi type scenes. Also, finally, the MCU and a Nirvana song come together (as Kurt Cobain wanted)

Captain Marvel is an effective Avengers prequel in some ways akin to the 1st Captain America movie. It’s pro-woman without being overdone with pre and post credit scenes that made me tear up and gave me goosebumps respectively pic.twitter.com/or2Oj7CdRV

Fans of #CaptainMarvel comics are going to love the movie. Plain and simple.

Captain Marvel hits theaters March 8th. Will you be watching?