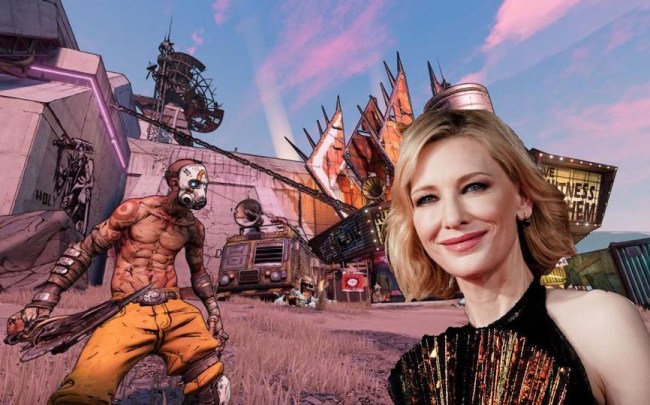 When it was first announced that Eli Roth (director of Hostile, plays “The Bear Jew” in Inglourious Basterds) would be helming an upcoming adaptation of the Borderlands video game, my initial reaction was one of trepidation: “Uh, I mean this sounds cool, but I can already envision a million ways it could go wrong.”

And while I still may harbor those concerns, the fact that the film has now scored Cate Blanchett — arguably the best actress of her generation — to star has raised my expectations for the project infinitely.

Cate Blanchett has grabbed the leading role in director Eli Roth’s adaptation of Borderlands for Lionsgate.

The project is the latest video-game adaptation after Mortal Kombat, The Angry Birds Movie, Pokemon: Detective Pikachu and Sonic the Hedgehog, among others, made it to the big screen and streaming services from the gaming world.

In addition to Borderlands, Blanchett is also set to star in James Gray’s upcoming Armageddon Times and Adam McKay’s Don’t Look Up. [via The Hollywood Reporter]

Blanchett is set to star as Lilith, one of the main characters in the first Borderlands game that is described as “a siren and legendary thief equipped with magical skills.”

Nabbing the Academy Award-winner is a massive get for Roth as it provides the film with a level of credibility that it simply did not possess before. Eli Roth is certainly a respected director, but the only “mainstream” film he’s directed in the last decade or so is the children’s movie The House with a Clock in Its Walls — adding Blanchett to the cast now gives Borderlands — which promises to be a tricky property to successfully adapt — a sustainably greater deal of dramatic weight.