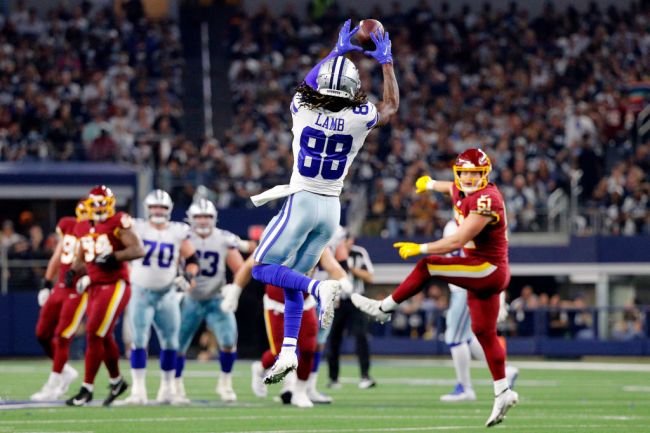 It came as a bit of a surprise to football fans when the Dallas Cowboys traded Amari Cooper to the Cleveland Browns for just a 5th round pick and to exchange 6th round picks.

It turns out that football fans weren’t the only ones surprised. While talking to NFL.com, CeeDee Lamb revealed his surprise when he heard the news.

CeeDee Lamb on becoming Cowboys' No. 1 WR: It "raised the standard"https://t.co/7Rp66Nv32y pic.twitter.com/xUhfVaYDwN

“I was actually in the gym. I saw it. It was on TV. I was working out in Fort Lauderdale in my offseason program, and I saw it on TV, and I was like, ‘Wow, that’s crazy’. And then my phone started blowing up literally minutes after. It’s been a crazy story ever since.”

Lamb also discussed what Cooper no longer being with the Dallas Cowboys means for him.

“That’s a lot to take in. It kind of happened so fast, but I feel like that’s a situation I’m ready to take on. Obviously, I hold myself to a high standard already, but obviously, at this moment, there’s nothing else you can really do but take it on. That’s the energy I have.”

Lamb will now need to remind everybody why the Cowboys made him the 17th pick in the 2020 draft. Last season, he was expected to have a breakout season with Dak Prescott back as the team’s starting quarterback. While he did improve his numbers from his rookie year, he didn’t take the leap many expected and wasn’t able to establish himself as one of the league’s top receivers.

As the clear number 1 option for the Cowboys in 2022, Lamb will now have a ton of responsibility in the Cowboys offense and will. have plenty of opportunities to prove he belongs in the conversation as one of the league’s best.