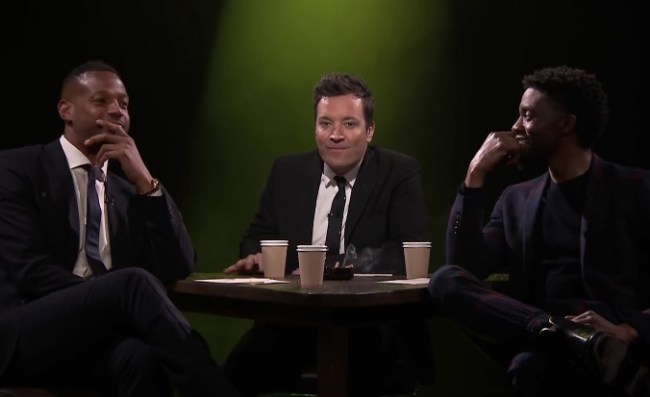 ‘True Confessions’ is one of the better recurring sketches on The Tonight Show Starring Jimmy Fallon. It’s essentially a ‘true or false’ game. You’ve got two people staring at each other, face-to-face, and the idea is to either tell a truth so outlandish that the person thinks it’s a lie or to tell a lie that’s believable enough so that the other person thinks it’s a truth. The main goal is to trick the other person into guessing wrong.

Chadwick is the star of Marvel’s Black Panther, playing King T’Challa. He’s on top of the world right now, the star in the biggest February movie release in history, a film that’s absolutely killing it at the box office. So if you were to ask me ‘Cass, who do you think is more likely to have made out with your old next door neighbor Madonna?’ I’m not sure I would’ve answered Marlon Wayans….Also, did you like how I just casually threw in there how I used to live next door to Madonna? Technically, we shared a fence in our backyard. I was living in a 7-bedroom townhouse with 6 roommates from college in the Upper East Side on 80th and Lex and Madonna bought two townhouses behind our backyard to combine them into one, so our backyard was attached to hers and she got to listen to our drunk AF summer parties for an entire year.

Moving on, the video from last night’s episode of Fallon that has been going viral shows people looking at a picture of Chadwick Boseman and thanking him for Black Panther. Then, Chadwick pops out and surprises them. Here’s that clip: