Charlize Theron Says She Wants Somebody, Even An Average Guy, To ‘Grow A Pair, Step Up’ And Ask Her Out 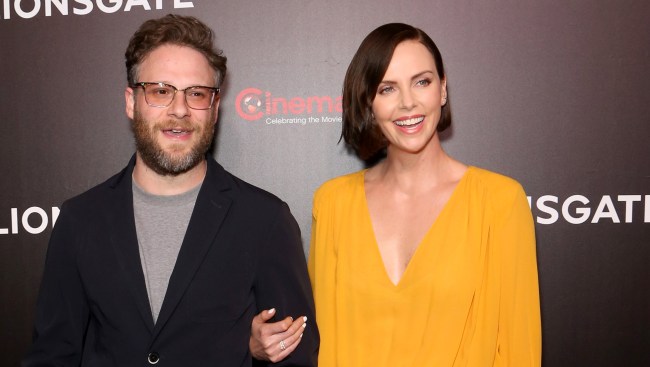 Breaking News: In an interview with ET’s Kevin Frazier at CinemaCon in Vegas on Thursday, Charlize Theron admitted that she would very grateful if someone, even an average guy, would “grow a pair and step up” and ask her out on a date. Consider that your opening, bros.

During the interview with Theron and her Long Shot co-star Seth Rogen, Frazier asked her if she’s ever dated a “long shot.”

She proceeded to ramble on about the movie without ever actually answering the question, so Frazier doubled back, saying, “I hear you. I get that. You’re Charlize… so, you know, getting there is not… what I am saying, for the average guy it’s a long shot.”

“It really isn’t. I’ve been single for 10 years, it’s not a long shot. Somebody just needs to grow a pair and step up. I’m shockingly available.”

“She’s out there,” Rogen agreed.

“I have made it very clear,” Theron lamented.

Also during the interview, Theron talked about a recent Instagram photo she posted with the caption, “A puppy bit my boob off. How’s your Monday going?”

“By the way, my kids actually did think it was off and then asked many questions afterwards,” Theron told Frazier. “It’s damaged… there’s damage. There is damage in this area, yes. But I still love the puppy and the puppy should find a good home and I don’t blame the puppy. I blame my boob.”

So, yeah, all in all, it was a pretty good interview.

Long Shot comes out on May 3rd.