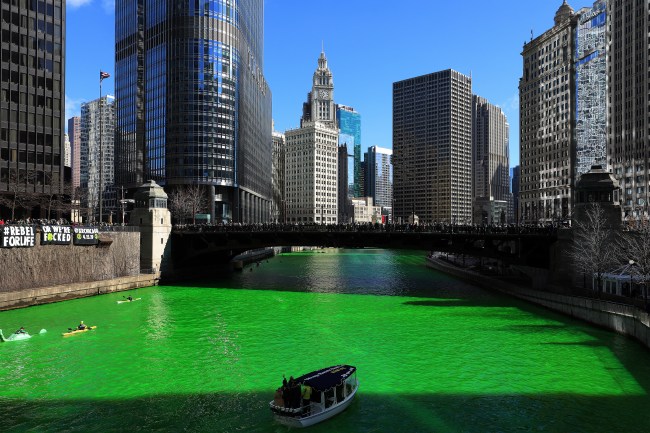 As I’m sure everyone knows, this past Sunday was St. Patrick’s Day and that means there were celebrations in every city across America from parades to pub crawls to corned beef feasts and everything in between.

It’s a tradition in Chicago to dye the river green for St. Patrick’s Day and they don’t just turn the river a slight shade of green, they dump enough dye in there to turn that thing the brightest shade of green imaginable. It’s SO GREEN that it’s actually more/lighter green than some of the green screens at news stations that weathermen use with graphics superimposed on the background.

After people started tweeting videos of *how green* the river in Chicago was, a few skilled video artists realized they could use the river as a green screen and pretty much put anything they wanted on top of the water. Twitter had a field day with the footage, let’s check it out…

This never gets old. The Chicago River goes green to celebrate #StPatricksWeekend. ☘️ (Via @chicagotribune) pic.twitter.com/lHgjVZPooF

A meteorologist can probably do a weather forecast from the Chicago River. It's greener than @nbcbayarea's green screen. https://t.co/sTiHA7cWdK pic.twitter.com/SjhRo6Tk8u

This user swooped in with the first photoshop:

Someone with time and resources do a proper one of these. Free joke concept people, it’s *yours*

Then Parker Molloy and others started sharing their own edits including this glorious one of the 1997 Chicago Bulls starting lineup:

Wired: dyeing the Chicago River the starting lineup for the 1997 Chicago Bulls pic.twitter.com/bN5vf8U1sc

guys they made the river a green screen heheheheheheh pic.twitter.com/O2xthCUath

And the Avengers: Endgame trailer:

Using the dyed river like a green screen and replacing it with the Avengers Endgame trailer pic.twitter.com/6DtxllvIrl

It’s never occurred to me until right now that this is also possible with soccer (and football) games:

Why aren’t more people doing this with NFL games? The footage exists. The fields are green. Why aren’t we making this happen?