Chilean Soccer Player Levels A Pitch Invader, Uruguayan Opponent Tries To Get Him Carded For It 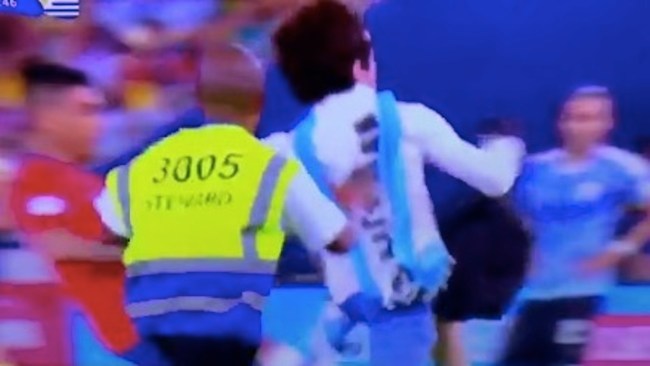 Whether you’re a fan of the game or not, you have to admit that soccer has an element of madness that few other sports have.

Argentinian club Boca Juniors has a barbed-wire laced fence between the players and the patrons. The biggest club game of the year, the Champions League Final, had an Instagram model streak across the field. The history of the infamous pitch invasion has its own Wikipedia page. The World Cup exists, period.

But despite the fact the soccer has long been inciting these types of bizarre incidents for hundreds of years, the game always seems to find a way to produce a new brand of chaos.

During Monday night’s COPA America game (think of it as the World Cup involving only teams from South America — oh and also Qatar and Japan, because soccer) between Uruguay and Chile, yet another pitch invader built up enough presumed liquid courage to make his way onto the field.

While the man thought he was successfully evading the stadium’s security staff, we forget that there’s another group that wants to see the intruders joy run end as quickly as possible: the players themselves.

As the unnamed pitch invader made his way towards the center circle, Chilean defender Gonzalo Jara decided that enough is enough, absolutely decking the rowdy fan.

However, perhaps more entertaining than the actual player-on-fan tackle is the reaction of Uruguayan striker Luis Suarez (the Barcelona forward who you may know as that dude who bites people), who immediately runs up to the head official to appeal for a card to be given to Jara.

Suarez — who has a well-established reputation of being one of the biggest cheats in the sport — asking a referee to card an opponent for tackling someone who is breaking the law is PEAK soccer shithousery and it is to be respected.