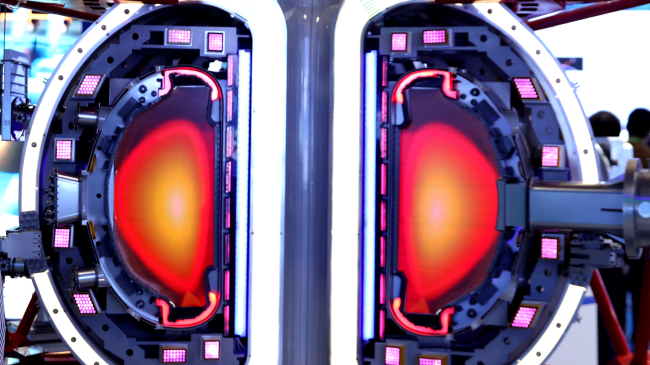 Chinese scientists recently achieved a new world record with their “artificial sun”, i.e. experimental nuclear fusion reactor, by superheating a loop of plasma to temperatures five times hotter than the sun for more than 17 consecutive minutes, according to the Xinhua News Agency.

“We achieved a plasma temperature of 120 million degrees Celsius for 101 seconds in an experiment in the first half of 2021,” said Gong Xianzu, a researcher at the Institute of Plasma Physics of the Chinese Academy of Sciences (ASIPP). “This time, steady-state plasma operation was sustained for 1,056 seconds at a temperature close to 70 million degrees Celsius, laying a solid scientific and experimental foundation toward the running of a fusion reactor.”

According to the statement announcing their latest achievement, “The ultimate goal of EAST, located at ASIPP in Hefei, is to create nuclear fusion like the Sun, using deuterium abound in the sea to provide a steady stream of clean energy.”

According to Live Science…

…replicating the conditions found inside the hearts of stars is no simple task. The most common design for fusion reactors, the tokamak, works by superheating plasma (one of the four states of matter, consisting of positive ions and negatively-charged free electrons) before trapping it inside a donut-shaped reactor chamber with powerful magnetic fields.

Keeping the turbulent and superheated coils of plasma in place long enough for nuclear fusion to happen, however, has been a painstaking process. Soviet scientist Natan Yavlinsky designed the first tokamak in 1958, but no one has ever managed to create an experimental reactor that is able to put out more energy than it takes in.

One of the main stumbling blocks has been how to handle a plasma that’s hot enough to fuse. Fusion reactors require very high temperatures — many times hotter than the sun — because they have to operate at much lower pressures than where fusion naturally takes place inside the cores of stars. Cooking plasma to temperatures hotter than the sun is the relatively easy part, but finding a way to corral it so that it doesn’t burn through the reactor walls (either with lasers or magnetic fields) without also ruining the fusion process is technically tricky.

EAST, which is expected to cost China more than $1 trillion by the time it is completed, is just one part of the International Thermonuclear Experimental Reactor (ITER) facility, a partnership of 35 countries estimated that aims to build the world’s largest nuclear fusion reactor – second only to the International Space Station in size when it comes to global science projects.

ITER, which contains the world’s most powerful magnet, is capable of producing a magnetic field 280,000 times as strong as the one around the Earth, reports Live Science.