LOOK: Chipper Jones Got Roasted By Andruw Jones For Dropping A Foul Ball That Hit Him In The Hands 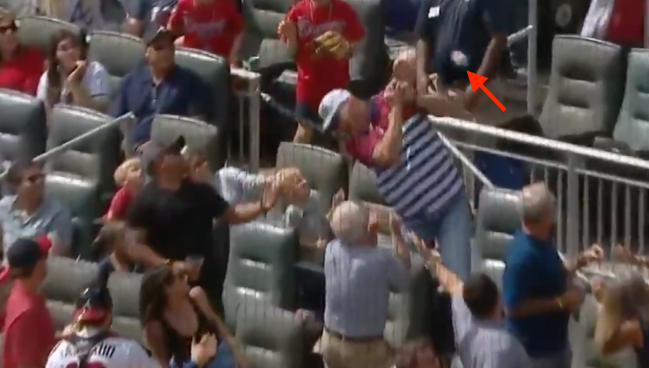 One of the only things that he was missing was a Gold Glove. And on Monday, Jones reminded us why.

During the second inning of the Braves’ playoff game against the Brewers, Luis Urias popped one up down the first base line. The ball went foul.

In the stands, just past the batter’s circle, was Jones. He stood up to make the catch but had it bounce out of his hands and onto the ground.

Chipper Jones, who had 254 career errors, dropped a routine fly ball and added a 255th.

To be fair, Chipper’s former teammate and ten-time Gold Glove winner Andruw Jones (who should also be in the Hall of Fame) was sitting right next to him and should have called him off. But he didn’t and Chipper dropped it, allowing Andruw to give him a hard time.

Here is the full play:

Chipper Jones drops a pop-up in the stands and he's taking heat from everybody, including Andruw Jones. What a moment. pic.twitter.com/NG67ArKdwX

It looked like Chipper lost the ball in the sun, but that is no excuse. Hopefully that isn’t an omen for Atlanta and its quest to beat Milwaukee and eventually go on to win the World Series.

If things end up going poorly over the next few days, months, years— could we look back on this moment as the start of a potential Chipper curse?